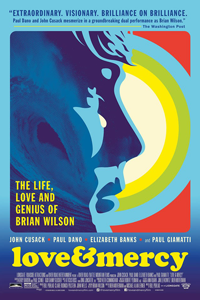 The first thing I did after seeing Love & Mercy was to look up Pet Sounds on Spotify. Of course I was familiar with Beach Boys songs such as Wouldn’t It Be Nice and God Only Knows. But it had never occurred to me Pet Sounds might be a serious work of pop-music art, or that Brian Wilson was a “genius” on a par with Paul McCartney.

Love & Mercy didn’t convince me that Wilson deserves the label “genius,” but it did make me sympathize with the man and appreciate his work much more than I had before.

The Lives of Brian

There are two Brian Wilsons in Love & Mercy, the younger played by a chubby Paul Dano; the older played by a sun-damaged John Cusack.

The story jumps back and forth between the 1960s and the 1980s. The older Wilson is buying a new Cadillac when he meets Melinda Ledbetter (Elizabeth Banks), a person who will shape his life to come. Meanwhile Brian’s controlling psychiatrist, Dr. Eugene Landy (Paul Giamatti), keeps him under constant surveillance and total control, with the aid of his bodyguard and reluctant snitch Doug (Erik Eidem).

The extent of Brian’s psychic damage is revealed through conversations with Melinda. Maybe some fans in the audience will already know that Brian Wilson “spent 3 years in bed” and gained an enormous amount of weight. It came as a sad surprise to me, revealed through John Cusack’s fragile, damaged, and unguarded performance.

The younger Wilson, after a panic attack on an airplane, decides not to tour with the Beach Boys but rather to stay home and work in the studio, writing songs and finding sounds and harmonies for their next album, Pet Sounds. Young Brian works closely with the Wrecking Crew (whom we know from a recent documentary called The Wrecking Crew), laying down tracks and recording interesting sounds.

This younger Brian listens closely to the universe and devotes all his energy to capturing and recreating it. In an interlude, a professional musician approaches Brian and praises his work. He calls Brian “touched,” which young Brian takes as a compliment, but which we see implies a certain mental illness as well.

All the while young Brian avoids his father (Bill Camp), a bitter man ever since he was fired by Brian and the Beach Boys.

In the early timeline, the conflict has to do with Brian’s musical development, and the friction it causes with the rest of the Beach Boys. Some of them want to stick to the formula that gave them such success. But Brian wants to pursue new directions. In frustration he exclaims “I can’t write about summer and summer and fun and summer and cars!”

In one of the film’s more obvious metaphors, the band has a meeting at the Wilson house, in the swimming pool, and Brian invites the rest of the band to join him in the deep end; they say they prefer to stay shallow.

Paul Dano looks a lot like his real-life counterpart. John Cusack, not so much. Others have praised Dano’s performance, but I like Cusack’s better.

He doesn’t just don his usual smart-aleck ironic persona. He conveys a fragile, vulnerable man. Through nervous mannerisms and unusual frankness, we see that he is not all there psychologically, even though his mind has a clear grasp of what’s going on. Cusack’s Wilson is oddly cognizant of his mental health problems; he can talk about them and explain them, yet they still have some sort of power over him. He’s still damaged by them.

Actually, he seems surprisingly healthy, in an overcoming-difficulties sort of way — until we meet his doctor, that is.

As Dr. Eugene Landy, Giamatti is a controlling, domineering force. I even think Giamatti’s performance is a little over the top, but with Cusack’s Brian being so fragile, it’s easy to see Landy through Brian’s eyes, and in that context “over the top” might be appropriate.

As Melinda, Banks lets a lot of human complexity shine through the blonde 1980s beauty. I got the impression Melinda was hired to sell Cadillacs because of her looks by a male boss, but she pretty quickly becomes much more than a blond sales pitch.

Wilson intrigues her before she knows who he is. Then she seems excited about his fame. Then she moves past that and her mothering/nurturing instincts kick in as she tries to save him from Dr. Landy.

Director Bill Pohland and cinematographer Robert D. Yeoman (who has worked with Wes Anderson) present lots of gimmicky shots, but as obvious as they are, I like them. Swirling cameras reveal scene changes done in the background mid-swirl. A mirrored restaurant booth reflects the many faces and of Wilson — though not gratuitously. Pohland and Yeoman use this technique in the scene where he first tells Melinda (and the audience) about his darkest, most conflicted inner personalities.

Apropos of its main character, Love & Mercy features great sound design. Young Brian lays in the studio or on the hood of his car, letting the universe filter in through his ears. Older Brian lays in his bed, tortured by sounds he can’t get out of his head. After the film, long credits reveal components of the aural montages that fill his ears.

if Love & Mercy deserves any criticism, it might be that the supporting characters are too Brian-centric. Giamatti’s cartoonish villain and Banks’ nurturing mother/wife are caricatures tuned to how Brian might have seen them. In any case, it’s not a serious problem for Love & Mercy, which proves entertaining and enlightening for this non-Beach-Boys fan.

Regardless of what you think about Wilson’s musical genius, Love & Mercy is a good biopic with several outstanding performances.