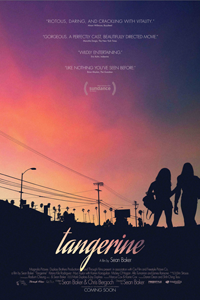 Little is as it seems in “Tangerine,” a fast, raucously funny comedy about love and other misadventures. That’s true of its main attractions, a pair of transgender lookers with motormouths and killer gams, as well as the nominally straight men occupying their hearts and minds. Appearances both deceive and delight in this tough yet tender, gritty yet gorgeous movie, which was made with ingenious skill and what would count as chump change at the big studios. Shot along a grubby stretch of Los Angeles, it takes place in the looming shadow of the Hollywood sign, but as far from industrial cinema as another galaxy.

That much is obvious the moment the movie opens on Sin-Dee Rella (Kitana Kiki Rodriguez) and Alexandra (Mya Taylor), face to face in a doughnut shop, a single sprinkled confection grandly set before them. Tight friends, Sin-Dee and Alexandra share much in common, including a taste for sweets, a weakness for men and absolute faith in the transformational power of a luxurious wig. Given the girl talk and high-pitched shrieks of laughter, you may not immediately notice that the women are transgender, with identities that speak to the cultural moment. “Tangerine” encompasses dizzying multitudes — it’s a neo-screwball chase flick with a dash of Rainer Werner Fassbinder — but mostly, movingly, it is a female-friendship movie about two people who each started life with an XY chromosome set.

The story, from a script by the director Sean Baker and Chris Bergoch, is largely an excuse to chase after Sin-Dee and Alexandra as they navigate the frayed, less-familiar margins of Los Angeles. It’s Christmas Eve, and Sin-Dee, having been released from jail, is looking to reconnect with her boyfriend and pimp, Chester (James Ransone), when she learns that he’s stepped out on her. That cheating is an occupational prerogative for a pimp doesn’t much concern Sin-Dee, who soon is hot in search of Chester and his mystery woman (Mickey O’Hagan as Dinah). Alexandra, the more pacific of the friends, vainly tries to calm Sin-Dee, a fast-talker and -walker whose bodily rhythms create a time signature that’s answered by the editing, camera swoops and pumping musical beats.

Mr. Baker has justifiably received a lot of attention for shooting “Tangerine” with a few tricked out iPhones and some special lenses. His low-budget triumphalism and mother-of-invention ingenuity hews to a familiar heroic indie-film arc, though more remarkable still is Mr. Baker’s casting of Ms. Rodriquez and Ms. Taylor, both fluid, forceful screen presences. He met Ms. Taylor at the Los Angeles L.G.B.T. Center, the 21st-century version of Lana Turner’s apocryphal discovery at Schwab’s; Ms. Taylor introduced him to Ms. Rodriguez. Like Turner, an old-fashioned Hollywood invention, the women embody an on-screen ideal of sexualized, glamorized femininity that means radically different things depending on the bodies expressing it. For Turner, femininity could look like a bad performance, like tawdry drag, even prison. Here, it looks like liberation.

Maybe it is, maybe it isn’t. “Tangerine” doesn’t dive deep into transgender identity; the movie is a dizzy, often exuberant down-and-dirty romp, not a lesson. It casually reminds you that femininity is a mask that can be slipped on and off, as when Sin-Dee’s voice mischievously drops an octave or when Alexandra reminds a foolish client (Scott Krinsky as the parsimonious John) that she’s easily his physical match. What’s radical about “Tangerine” isn’t identity — which enters directly and obliquely, playfully and powerfully — but that Sin-Dee and Alexandra aren’t limited by it. There’s something blissfully freeing about that, just as there’s something shocking when you remember that, not long ago, characters like these would have often been called on to decorate the story’s edges or just laid out on a slab.

Step by humorous, occasionally hurting step, Sin-Dee’s quest takes her across Hollywood, which may be a state of mind to some but is a real neighborhood to others. Rarely since Michael Mann directed “Collateral” has a filmmaker mapped Los Angeles as lovingly and, with such open eyes, as Mr. Baker has. This isn’t the usual movie-made city of fallen, monotonously stereotypical angels, with its suburban mega-fortresses, oceanside views, clogged freeways and Joan Didion anomie. It is, instead, a viscerally, vibrantly lived-in metropolis filled with people of different hues who walk (in Los Angeles!), ride the subway (yes, the subway), hop buses and occasionally jump into the cab of a frisky Armenian, Razmik (Karren Karagulian), whose home life and passengers all add layers to the diversified picture.

This mix feels bracing, honest and unforced. It’s also political (as is the focus, however narratively expedient, on public transportation), which is sometimes the case when black and brown bodies take up this much time and space on an American movie screen and so beautifully, too. Unlike a lot of white directors, putatively independent and not, Mr. Baker hasn’t simply looked in a mirror for his inspiration, but into that infinite world of possibility that is other people. When he bathes Sin-Dee and Alexandra in the luscious orange of another smoggy Los Angeles sunset, you may note the warm, radiant palette and, almost in passing, admire how the harmonious performances fit with the gracefulness of the filmmaking — but what you see, really see, are two women shimmering in the sun.