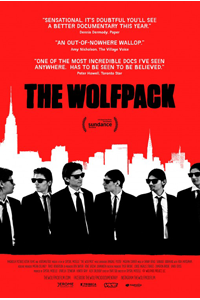 Movies can change your life, but can they save it? For most people that probably sounds foolish, but the six brothers featured in the astonishing documentary “The Wolfpack” aren’t most people. For much of their lives, these six ingenious young men used the movies to imaginatively if not physically break out of their Lower Manhattan apartment in a building run by the New York City Housing Authority. Even as their father all but imprisoned them (one year they never left the apartment), they made great metaphoric escapes by immersing themselves in the fictional realms created by directors like Francis Ford Coppola and Quentin Tarantino.

The Angulo brothers — originally named Bhagavan, Govinda, Narayana, Mukunda, Krsna and Jagadisa, now ages 23 to 16 — made their escapes the way many people do, by watching movies at home on VHS and DVD. But they also recreated, on camera and off, favorites like “The Dark Knight” using handmade costumes, face paint and scripts they transcribed line by line without a computer. To replicate Batman’s signature Gotham-gone-Goth look, Mukunda explains, they repurposed yoga mats and cereal-box cardboard, displaying the kind of tape-and-spit creativity that’s a hallmark of movie-crazed youngsters and real independent filmmakers everywhere. The home-schooled Angulos weren’t goofing around in between play dates and Little League practices, neither of which they apparently experienced: For them, movies were a form of self-expression as well as a kind of survival.

That makes this warm, disarmingly optimistic documentary sound desperately sad when it’s anything but. Much of the back story for “The Wolfpack” could have gone full-bore Dickensian, as suggested by the family’s unusual history and rundown apartment, with its sad, shabby carpeting and cracked windows. It’s easy to imagine what an exploitative director, using artful editing and a sinister score, could have done to darken this material. At the same time, it’s hard to imagine a more sensitive director for this story than Crystal Moselle, a 34-year-old who five years ago discovered the brothers soon after they began making unaccompanied excursions outside. Sometimes, all you need is a great subject to make a great documentary — or a willingness to chase after total strangers.

A gifted editor helps, and “The Wolfpack” has one in Enat Sidi, a veteran who aided Ms. Moselle in shaping years of material into a streamlined 84-minute chronicle of love and resilience. The family’s story emerges elliptically as the boys grow up on screen, largely in intimate moments in which one or another — the four eldest boys do much of the talking — open up about their lives with indoor voices colored with hints of Steve Buscemi (of “Reservoir Dogs,” another favorite). Their mother, Susanne Angulo (she now uses her maiden name, Reisenbichler, as do two of her sons), met their father, Oscar Angulo, on the trail to Machu Picchu. She was from the Midwest, he was from Peru, and together they traveled the United States and had seven children (including Visnu, a disabled daughter) to whom they gave Sanskrit names

Ms. Moselle tends to omit the kind of information that might have made it into another documentary, including outside testimonials, supporting evidence and even establishing identifiers. There is no introductory text to set the scene and no voice-over to fill in the gaps; the movie just opens on a bleak New York cityscape, the camera skittishly poking around outside a brick high rise. The only people who speak in the movie are the Angulos and, presumably, Ms. Moselle, so you have to take it on faith that everything in it is true. (Ms. Moselle doesn’t identify herself, but I assume that’s her tossing out periodic off-camera remarks.) Yet what might elsewhere register as problematic, including a restricted focus and borderline naïve approach, actually strengthens the movie.

“The Wolfpack” has the virtue of an unfamiliar tale, one that’s further distinguished by the persuasive intimacy that comes from the Angulo brothers’ sincerity and openness, and their obvious love for their family. Ms. Moselle’s affable informality adds to the intimacy — the brothers tend to come across more like friends than subjects — as does the claustrophobia of their apartment, a warren of rooms with a long hall that seems to grow shorter as the movie unfolds. In one arresting video snippet, a few brothers zip down that hall on scooters, followed by another wearing in-line skates. For years, this narrow corridor, you realize, was their playground, their skate park, too. And their great outdoors? That was the world that they watched from their windows as it indifferently passed them by.

In its intense personal quality and complex family dynamics as well as in Ms. Moselle’s disregard for (or lack of interest in) the questions that some of her methods raise, “The Wolfpack” can bring to mind Albert and David Maysles’s “Grey Gardens.” It’s important to underscore that there’s never any question as to the mental health of the Angulo brothers, unlike with the mother-daughter duo in “Grey Gardens,” another documentary that benefits from closing the traditional divide between filmmaker and subject. The Angulo brothers come off as smart, well-adjusted and charmingly eccentric; in other words, they’re New Yorkers. And while they’re movie mad, they belong to the same great tribe that many of us do, a tribe that finds joy and sustenance being transported into other worlds.

Given how much the brothers share, candidly and obliquely, and given their ages, it never feels as if Ms. Moselle is exploiting them; she never prods them, at least on camera, to reveal more than they seem to want to. Documentary has a tradition of trafficking in the misery of other people’s lives, so it’s a relief that “The Wolfpack” doesn’t drag you down or offer packaged uplift, but instead tells a strange tale with heart and generosity. You’re left with the sense that something went wrong for this family, but that whatever did (no laws seem to have been broken) is none of our business. “The Wolfpack” is a reminder that documentary cinema isn’t a license to snoop into other lives (sometimes, all you need is a cordial visit) and that while movies can save lives, that works only if there is also as much love as there is here.