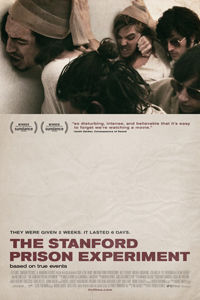 Fine ensemble acting brings a notorious psychological study to life in “The Stanford Prison Experiment.” The research, now 44 years old, may today seem as if it merely confirmed the obvious, but the film, by Kyle Patrick Alvarez, certainly makes you feel the claustrophobic intensity of what went on.

The film is about a 1971 study done by a Stanford University professor, Philip Zimbardo, in which students were recruited to play either guards or inmates in a make-believe prison. Guess what? People put in positions of authority, like prison guards, sometimes abuse that authority, and in startlingly cruel ways.

Billy Crudup, playing Dr. Zimbardo, is the most recognizable name in the cast, and he does nice work portraying a man who, as the experiment spirals out of control, is torn between protecting the students and protecting his research. But it’s the young actors playing the students who really make an impression.

Michael Angarano is downright terrifying as a guard who patterns his behavior after a particularly nasty character in the prison movie “Cool Hand Luke,” which had come out in 1967. The students playing prisoners adopt attitudes ranging from rebellious to meek, but none are immune to the brutal treatment of their overseers.

The experiment’s methodologies and meanings have been analyzed endlessly over the years, and the film doesn’t delve deeply into these interpretations and critiques. It doesn’t need to; this stark and riveting version of events speaks for itself.