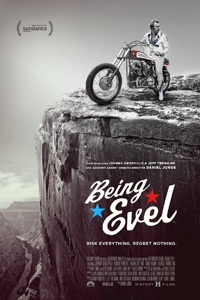 I don't know what you think about Evel Knievel, whose daredevil stunts and showmanship made him a national celebrity during the 1970s. To be frank, I spend no time thinking about Knievel, his death-defying antics or his legacy. It must say something, then, that I found Daniel Junge's new documentary -- Being Evel -- entirely compelling.

Working with new and old interviews and footage from ABC's Wide World of Sports, Junge (and editor Davis Coombe) assemble a documentary that's revealing, entertaining and likely to appeal to those who idolize Knievel, as well as those who find him a less than exemplary figure.

Knievel, who died at the age of 69 in 2007, made his mark by leaping over lines of cars on his motorcycle. At one point, he even tried to launch a rocket-driven cycle over Idaho's Snake River Canyon. Junge tells us that Knievel's stunts can be viewed as a precursor to the thrill-crazed world of extreme sports. Knievel himself aptly describes some of the allure: "No one wants to see me die, but they don't want to miss it if I do."

It's clear that Knievel understood the value of hype and promotion. Eventually, he tried to take his act in a different direction, trying (without success) to make an impact on the big screen. I'd totally forgotten that actor George Hamilton once played Knievel -- 1971's Evel Knievel -- a chapter Junge includes in a film that's as revved up as one of Knievel's bikes. No one can spend a life doing what Knievel did and not get hurt, but no amount of broken bones deterred his efforts to find new ways to put his life on the line.

I can't say that I liked Knievel when the film was done, but I admit to watching his life unfold with a kind of bemused amazement. Knievel seems to mean it when he talks about having no fear, even if to some of us it may look as if he had no sense, either. Whatever you conclude about Knievel, it's clear that Junge has captured a telling piece of Americana -- not only about the man, but about those who were glued to TV sets to watch him.