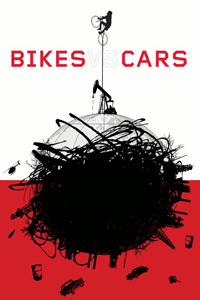 Most American automobile commuters spend 55 working days in traffic every year, 3 hours per day, and 25% of their income on transportation costs, while 50% of their car trips are less than 3 miles long.

Fredrik Gertten's “Bikes vs Cars” is a terrific documentary which demonstrates just how draining and straining automobile traffic is in heavily populated cities like Los Angeles and Sao Paolo, Brazil, and just how easy and well accepted commuting by bicycle is in bike captial cities like Amsterdam, Copenhagen, and Berlin. For example, in Copenhagen, Denmark, there are 1000 kilometers of bike lanes and 4 out of 5 people own a bike. 40% of the entire city commutes on bicycles, while in Los Angeles, California, only 0.8% commute by bike.

How many people dislike driving, traffic jams, the cost of parking, gas, tolls, registration, insurance, and maintenance, yet have no other public transportation options?

Why and when were these options eliminated and by who? Why were they in favor of constructing freeways? What percentage of Los Angeles is currently dedicated to roads and parking?

Bicyclist advocates, Raquel Rolnik, a professor at the University of Sao Paulo’s School of Architecture and Urbanism Department, Don Ward, organizer of L.A.’s ‘Wolfpack Hustle,’ the underground bicycling club known for their midnight rides, and Dan Koeppel, who founded and organized ‘The Big Parade,’ a two-day community walking event in Los Angeles, discuss urban sprawl, bicycle activism, and ways to improve the environment.

“They keep building the freeways wider and wider, 6-12 lanes wide, thinking that the traffic will improve, but it only keeps getting worse and worse.”

Are cars still a status symbol? What does your car say about you? Are you single? married? Wealthy? How much does the automobile industry spend on advertising? How many electric cars have they sold? What percentage of cars will be sold to the millennial generation over the next 5-6 years, and what type of cars will they be interested in? How many cars are there are on the planet, and how many will there be in the year 2020? Which automobiles emit the most Carbon Dioxide, and which are the most efficient? Why is it so difficult to change urban planning to be more bike and eco-friendly? What was the Carmageddon weekend really like for bike riders, the air quality and pollution? and What’s really in the bike vs car dilemma for the politicians and oil companies?

If you reduce the number of cars by making it more expensive for them, reduce the amount of lanes, reduce the parking, increase the prices, add toll roads, and pressure politicians, will the traffic congestion get better or worse?

“Bikes vs Cars” will answer all of these questions.