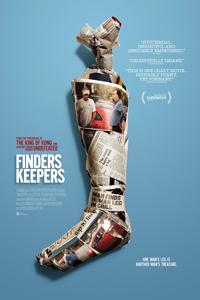 There’s an interesting interplay between Finders Keepers, a delightfully insane documentary about a man who finds a foot in a barbecue grill he buys at an auction, and the world of reality television. At first it seems like this grandiose and hysterical tale is something right out of Storage Wars or the other myriad shows that cast the characters of rural America as villains and buffoons, until it uses reality television against us.

Shannon Whisnant, a fast-talking “entrepreneur” buys a storage unit in North Carolina and finds the mummified remains of John Wood’s lower left limb stashed in a barbecue smoker. Wood lost the foot in a plane crash that also took the life of his father. Once the local news got a hold of the story – it’s one of those colourful local tales the internet loves to circulate – Shannon decides that he wants to keep the foot and charge people to see it. Wood, naturally, wants his foot back to make it into a shrine for his late father.

What happens is a standoff between a man who is obsessed with his newfound fame as the guy who found the foot and a pill-popping drug addict who can’t kick painkillers after the accident that severed his foot. Just when you think the tale is trying to make these men into caricatures, it turns on them, showing how direct links to reality television – the case was finally settled not in a court of law but by Judge Mathis on TV – redeemed one man’s life and ruined another’s.

Slickly directed by Bryan Carbury and J Clay Tweel, this fast-paced, laugh-out-loud movie will catch you by surprise with amusing animation to help simplify the story as well as a great ear for the more picturesque rhythms of low-income southerners. Finders Keepers pays as much attention to the comedy of the story as the humanity. What could easily be a silly saga or a simple indictment of the culture of fame becomes something diabolically more insightful and uplifting. It’s about how one small incident can change the lives of two families. It shows that reality television only has as much power as we give it, and that power can be used for both good and evil.