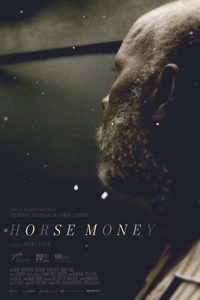 Pedro Costa, the Portuguese director of “Horse Money,” is one of a handful of filmmakers who could claim to have invented their own approaches to narrative. Beginning with “Ossos” (“Bones”) in 1997, he made a trilogy of films set in the Lisbon slum of Fontainhas, an enclave of Cape Verdean immigrants that has since been razed. In the subsequent “In Vanda’s Room” and “Colossal Youth,” Mr. Costa veered away from pure fiction and allowed Fontainhas residents to shape their dialogue and scenes. Drawn from real-life details though hardly documentaries, Mr. Costa’s movies unfold through monologues and tableaux, finding poetry and myth in the lives of the marginalized.

His austere style, which favors long takes, minimal lighting and settings that don’t announce their locations, has divided critics. But even for those fascinated by the Fontainhas project, Mr. Costa’s new film makes for demanding, often baffling viewing.

Its fragmented episodes are based on the experiences of Ventura, the protagonist of “Colossal Youth,” who again plays a version of himself. If that earlier film, set in a memory-haunted shantytown, was already a sort of ghost story, “Horse Money” dips further into the cinema of the fantastic. (It is certainly the only Costa film that pauses for a long musical interlude.)

In a sense, it is an old-fashioned Freudian loony-bin tale in which a hero grapples with repressed guilt. As the film opens, Ventura descends into what appears to be a dungeon, only to wind up in a hospital where he is greeted by comrades from his past. These (likely) phantoms include Vitalina, a Cape Verdean who has traveled to Portugal for the funeral of her husband, a man who Ventura says is still alive. (The men’s ability to provide for their families figures heavily in the elliptical narrative.)

When a doctor asks Ventura for his age, this disoriented protagonist, who is perhaps 60, says he is 19 — repeating a lie from his youth — and gives the date as March 11, 1975, the day of a failed military coup in the aftermath of Portugal’s Carnation Revolution. At around this time, Ventura was involved in a fateful knife fight.

Mr. Costa’s high-contrast compositions only heighten the ghostly atmosphere; the barely lit hospital might as well be operating on emergency power. The actors are often positioned against squarish pools of light that resemble film projections. Nothing can be taken at face value: The chronology is slippery. When Ventura is trapped in an elevator with a soldier, the dialogue doesn’t match the visuals.

Audiences unfamiliar with Mr. Costa are likely to find the experience incomprehensible, but “Horse Money” offers a challenge worth meeting for viewers prepared to give it patience. The puzzle-box narrative only grows more hypnotic with repeat viewings. The movie insists on having the audience, like Ventura, pass through madness to reach catharsis.