We Come as Friends 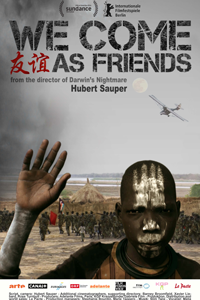 In “Darwin’s Nightmare” (2005), a searing Oscar-nominated documentary about economic exploitation in Tanzania, the director Hubert Sauper found a perfect microcosm for colonialism in the invasive Nile perch. The fish was artificially introduced into Lake Victoria in the 1950s and ’60s, ate all the other fish and then was exported as food for Europe and Japan. In the meantime, Tanzania suffered from a famine, and as the film repeatedly sought to demonstrate, the planes arriving to pick up the fish sometimes brought in weapons for use in the continent’s civil wars.

Planes also figure heavily in Mr. Sauper’s “We Come as Friends,” a follow-up of sorts to “Nightmare” that can stand on its own or play as a riveting and damning companion piece. Although it lacks a big hungry fish, the guiding metaphor is also the stuff of science fiction. Crisscrossing Sudan before and after South Sudan declared its independence in a 2011 referendum, Mr. Sauper likens his perspective (and that of the audience) to that of an alien approaching a planet called Africa. “We come as friends” is the suspect message of the investors we see in the film. Part of the argument here is that South Sudanese independence was heavily driven by outside forces because of the potential for profit from development.

Piloting an ultralight tin can of an airplane nicknamed Sputnik that he designed for filming the movie, Mr. Sauper produces the sort of angled aerial footage that you might associate with “Apocalypse Now.” With an eye for landscapes stunning and hellish, he is the rare documentary filmmaker who not only takes on tough subjects but also explores them with a vivid visual and aural approach. Beginning with the steel railroad tracks cut through the region in the Victorian era, the movie draws a through line to the bulldozers of the present day.

Mr. Sauper gets further grist for his sci-fi conceit in a scene that shows Chinese oil workers watching “Star Wars,” “2001: A Space Odyssey” and “Star Trek.” (“We come in peace,” Captain Kirk is seen saying. “But we’ll defend ourselves if necessary.”)

Working in a surreally inflected vérité style — with few title cards or identifications other than what is spoken on screen — Mr. Sauper also has a knack for catching his subjects in unguarded moments. A British bomb disposal expert wonders about the locals’ capabilities: “There must be a reason they’re still 200 years behind the rest of the world.” A Christian missionary from the United States calls South Sudan “New Texas.” Another says that the Toposa people of South Sudan “don’t understand property ownership the way you and I do.” A United Nations representative seems unusually concerned with oil. Foreigners are shown partying like frat boys when the country declares its independence.

The more skeptical of the Sudanese talk of poisoned water, being cheated out of their land and the barriers to communication. In one of many bleakly comic moments, a South Sudanese lawmaker who wants residents to lease their property mumbles his way through the national anthem. Peripherally, there are sound bites from Hillary Clinton, who says that “more and more, the world will look to Africa to be its breadbasket,” and expresses hope that Africans will profit from that.

The movie suggests that the benefits are decidedly skewed.

We Come as Friends