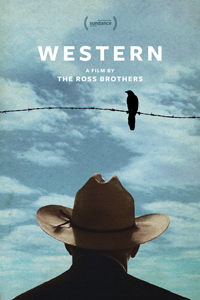 With a gentle hand, “Western” deposits us in the community of Eagle Pass, Texas, where gruff, mustachioed men in 10-gallon hats herd cattle for a living and life tumbles by, save for a few modern conveniences, the way it has for decades. “Just Another Day in Paradise,” announces a plaque on the office wall of the three-term mayor, Chad Foster, a silver-haired (and -tongued) gringo who speaks Spanish with a native’s colloquial ease and imparts a sense of level-headed decency wherever he goes. That includes frequent trips into Piedras Negras, the Mexican town that sits just across the border from Eagle Pass, populated by simple, hard-working people who seem mercifully insulated from the drug violence that has turned much of the country into armed conflict zones.

“Western” is about what happens when that violence does finally come a cropper, and how it disrupts the idyllic status quo of both towns. The seemingly unflappable Foster finds himself caught in the crossfire — literally — when a gunfight breaks out in a popular Piedras Negras lunch spot. But at least he lives to tell the tale, unlike his mayoral counterpart, Jose Manuel Maldonado, who dies in a mysterious plane crash midway through the film. (Foster himself died of cancer in 2012, after filming had wrapped.) Others feel the effects less directly, like the cattle rancher Martin Wall, whose business grinds to a halt when the USDA places a temporary ban on livestock trade between the towns, out of concerns for its inspectors’ safety. A barrel-chested man who looks like he could easily stare down a snarling bull, Wall turns to mush whenever the Rosses catch him in the presence of his precocious young daughter, Brylyn.

As in their “45365” (about everyday life in their hometown of Sidney, Ohio) and “Tchoupitoulas” (a nocturnal tour of New Orleans as seen through the eyes of three young brothers), the Rosses turn on a dime from the matter-of-fact (meetings with councilmen and constituents, the daily grind of ranch work) to the lightly impressionistic (desert winds blowing down dusty, empty streets) and back again. Stylistically, they seem to be informed equally by the cinema verite world of the Maysles brothers, the loving ethnography of Les Blank, and the ecstatic landscapes of Terrence Malick — a mix of influences that makes “Western” fascinating to watch even when it (occasionally) seems too enamored of its own poetic longueurs. Always, the film benefits from the brothers’ instinctive observational gifts and their intimate access to both communities, which seem far more alike than different, no matter the $49 billion border fence that threatens to divide them.

Where “45365” referred to a specific zip code and “Tchoupitoulas” to a storied NOLA thoroughfare, “Western,” true to its very title, is finally a more conceptual work. The movie is as much about these two towns as it is about an entire way of life that seems to be vanishing even as the Rosses are busy filming it, and along with it a genre of stories in which men of virtue reliably won out over those of ignoble aims — and didn’t have to wear capes or masks to do it. In “High Noon,” Gary Cooper’s grizzled marshal only had to worry about the arrival of a sadistic gang, not a sprawling criminal enterprise with the resources of a multinational corporation. But for the residents of Eagle Pass and Piedras Negras, there is no climactic shootout on Main Street, and Main Street itself may not be long for this world.