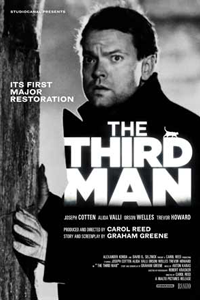 Holly Martins' (Joseph Cotten) best friend got himself run over and buried... so what's all the mystery about Harry Lime (Orson Welles)? Though he didn't make the film, Welles' thumbprint is all over The Third Man, which reteams Cotten and Welles (as seen together in Citizen Kane ) so very memorably. Rather, it's a classic Carol Reed flick: The second of three and easily the best of the films in which Reed teamed up with screenwriter Graham Greene.

The film takes place in immediately post-war Vienna, segmented, like Berlin, into occupied zones, with mountains of rubble on every block, thanks to all the collapsed brick buildings. Such an environment makes for a healthy black market, and as Martins arrives, he slowly learns that his good friend Harry wasn't entirely on the up and up. Eventually it's revealed that Harry was basically an assassin who faked his death when the heat got too close. Never mind the girl (Alida Valli) who loves him, Lime cares only about himself.

Welles doesn't appear until nearly the one-hour mark, as Martins plays amateur detective to figure out what happened to his pal. Their eventual meeting is a classic moment in cinema history. Unfortunately, the 'mystery' around The Third Man is hardly challenging. It's so straightforward, in fact, that I have no problem spoiling the fact that Harry isn't dead. I mean, you can't put 'Orson Welles' in the opening credits without raising some suspicion.

But Reed imbues the film with so much style, black comedy, and excellent little moments that its mild-mannered thrills don't really matter. It all picks up in the end, anyway, with a nearly ten-minute scene of Lime on the run for his life in the sewers of Vienna, with nowhere to go.

With its Dutch angles and unforgettable, intriguing score (performed entirely on a zither), The Third Man is a classic adventure tale, that speaks volumes about the juxtaposed hope and despair of post-War Europe. Everything you ever wanted to know about the dark side of human nature can be found in Orson Welles' smirking face, as he recedes into the shadows to try and stretch his life as a criminal out for just one more day.