The Tales of Hoffmann 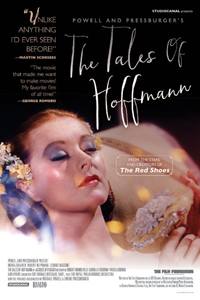 Watching “The Tales of Hoffmann,” screening in glorious vastness at Cinerama this week, feels like walking through a Technicolor field of poppies; you’re happily immersed in it and often a bit lost within, eventually emerging a bit dazed and dazzled by the experience. The film, originally released in 1951 and now back in theaters thanks to a lovely new restoration, is from that great filmmaking team known as the Archers. Michael Powell and Emeric Pressburger, an Englishman and a Hungarian, teamed up in the 1940s to make a series of vivid and unique films, among them “Black Narcissus,” “I Know Where I’m Going!,” “The Life and Death of Colonel Blimp” and their gossamer ballet masterpiece, “The Red Shoes.”

“The Tales of Hoffmann” was one of many bold experiments by the Archers: in this case, to film an opera using (mostly) dancers in the leading roles, with prerecorded singers and orchestral score. (The conductor, briefly seen late in the film, was Sir Thomas Beecham — music director of the Seattle Symphony for several years in the 1940s.) In the Jacques Offenbach opera they chose, a storyteller (played and sung by tenor Robert Rounseville), in love with a ballerina (Moira Shearer, the heaven-sent heroine of “The Red Shoes”), gathers an audience at a tavern to hear “my three tales of the folly of love.”

And off we go, on a fantastic voyage to Paris, Venice and a Greek island — all within the walls of a studio, where Powell and Pressburger made their magic. Never mind the stories: you watch this film for the swirling music (particularly the instantly recognized, gently swaying “Barcarolle”); the dancing camera; the paintbox hues of emerald green, velvety purple, primrose yellow; the mad passion for art that colors every shot. In one scene, ballerina Ludmilla Tcherina poses in arabesque, and you think of a dewdrop hanging from a leaf — something that you know can’t stay forever, but whose beauty seems perfect, and unending, in the moment.

“Tales of Hoffmann” ends with a moving, never-before-released epilogue (found by the restorers) in which the dancer/singer duos emerge, seemingly from the wings of a stage, and bow to us and to each other; each acknowledging the other half of their performance. Most if not all of these performers have since died; here, they live on.

The Tales of Hoffmann