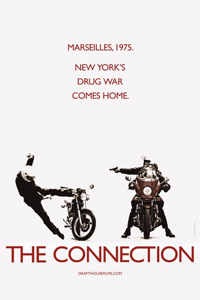 This testosterone-fueled crime thriller, set in drug-riddled Marseilles at the height of the 1970s heroin epidemic, plays like a gritty sidebar to “The French Connection.” From the first scene of a motorcycle zipping through traffic toward unidentified trouble, you feel you’re watching a fast-burning fuse headed for a mountain of dynamite. Jean Dujardin plays the new sheriff in town, determined to bring down the Corsicans, Neapolitan Italians and thugs cooking huge boatloads of opium for huge numbers of American addicts. He’s almost the physical twin of his arch enemy, the syndicate boss played with swagger by Gilles Lellouche. Their battle unfolds over a crackling 135 minutes. The middle-class lawman and ultrawealthy pusher are so focused on bringing down the opposition that each pushes his own marriage to the point of collapse. Cédric Jimenez directs with electric energy. While the story lacks focus here and there, the film never feels overplayed. It’s a work of bloody style and solid substance.