With Walter Chaw in person! 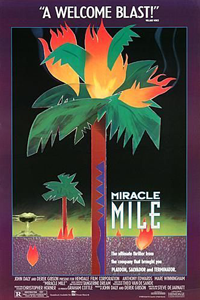 Buried under a thick veneer of glossy 1980s cheese, Steve De Jarnatt’s Miracle Mile offers an unusual mix of paranoia and against-all-odds romance. This high concept thriller begins with an extended, idyllic courtship but conjures a doomsday scenario after young musician Harry (Anthony Edwards) accidentally hears a phone call that convinces him that a nuclear disaster will break out in about an hour. From this point onward, the film takes place in close to real-time, as the hero and a woman he’s only recently become smitten with (Mare Winningham) attempt to escape Los Angeles. Set largely over the course of one night, Miracle Mile features a madcap cast of supporting characters to impede the hapless hero, calling to mind Scorsese’s After Hours. The tone here is alternatively goofier and more serious than in Scorsese’s film, though, resulting in a movie that powers by on energy far more than by thought.

This isn’t to discount the unique achievements of Miracle Mile. It is a drama with considerable ambition (often too much ambition…). The opening scenes, set in a Natural History museum, recount the evolutionary process establishing a scale that all that follows almost manages to live up to. As the two main characters traverse city streets, shopping malls and fitness clubs, the rest of the world, caught up in an increasing sense of panic, fades away, deepening the feeling that they have a love worth saving. Winningham and Edwards give winning, extremely likeable performances, in roles that have them compressing what feels like a lifetime’s worth of relationship drama into an evening. If the intensity of their emotions feel a bit strained at times, then the film only gains added meaning, as their actions could easily be interpreted as a desperate delusion devised to fend off their very real fear of death.

Miracle Mile is a deliberately quirky film that has been directed with considerable verve by De Jarnatt. His showy uses of slow motion, tracking shots, and expressive lighting effects intensify what is an already intense story. The score, by Tangerine Dream lends dreamy atmosphere when the visuals don’t get the job done alone. Miracle Mile is a singular film, despite its outwardly commercial premise. Its offbeat determination and manic energy all conjured in the name of love become almost inspiring. By focusing one frantic couple’s attempts to salvage their future together it channels Cold War anxieties into something beautiful.