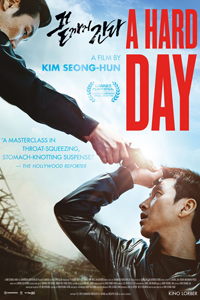 Not long after the panicky protagonist of “A Hard Day” avoids hitting a dog with his car on a dark highway — only to run over some guy, stuff the guy’s corpse into the trunk and be comically waylaid at a sobriety checkpoint by some Keystone clowns — you may wonder how long the writer-director, Kim Seong-hun, can keep this Rube Goldberg machine going. By the time the dupe-hero is sliding that cadaver through an air duct at the funeral parlor where his dead mother is laid out, it’s clear that Mr. Kim is just going to keep the gears greased and happily purring.

A kinetically visceral, enjoyable nasty joy ride, “A Hard Day” is pretty much as advertised. Its long day opens at night, with Gun-soo (Lee Sun-kyun), a South Korean detective, speeding on a highway while chattering on the phone with his sister. Their mother has recently died, and Sis wants to know why Gun-soo isn’t there with her and playing the dutiful, grieving son. Their exchange slips by quickly and is soon lost amid the horrible thudding of Gun-soo running over a body and the sound of so many falling dominoes, but their conversation introduces the idea that keeping up appearances is crucial. Gun-soo, who keeps a photo of his daughter on the dashboard (like a talisman or maybe a threat), is constantly looking over his shoulder, and that gets tricky when you’re racing from trouble.

One of cinema’s untold running, stumbling men (it’s a crowded field), Gun-soo has plenty to flee: his grief over his mother; the money worries of his hectoring sister and her inept husband; his colleagues, an ominous gang; his moral turpitude. As a director, Mr. Kim devotes much of his energy to keeping Gun-soo preoccupied, and with increased freneticism, to moving the character relentlessly forward in the face of an obstacle course filled with pop-up hurdles and an occasional kick in the gut. As the screenwriter, Mr. Kim is a quick-sketch artist when it comes to character motivation. He doesn’t fill in Gun-soo and the rest with psychological insight and anguished speeches; rather, with pointed asides — about failing businesses, corrupt cops and Korea — Mr. Kim paints a world.

Mr. Kim sets a tireless pace that never gets exhausting, at least not for the viewer. Shot in thin-looking digital, the movie has next to no visual density, which isn’t always nice on the eyes but suits this whooshing story. The editing, as is common in commercial action cinema, can be very fast, with some shots shorter, seemingly, than the blink of an eye. In a lot of action movies, quick cutting is mostly an attempt to create a sense of urgency that’s otherwise absent. You can get lost in the ensuing chaos, as the image splinters and scatters. Here, though, the editing initially prevents your having a coherent, unified image of Gun-soo — in moments, he looks as shattered as a reflection in a broken mirror — which visually suggests just what kind of man he is, what kind of stakes he faces.

Just about the time that it seems Mr. Kim should soon be running on empty, he introduces a new threat: another detective, Park Chang-min. Played by a spectacular Cho Jin-woong with a John Wayne swagger, an oily scoop of velvet Elvis hair and a billowing black coat that adds a bespoke dash to the villainous picture, Park slides into the story and soon very nearly engulfs it. Mr. Cho has a large face that can appear deceptively inviting (he often enters winking, underscoring his resemblance to the Man in the Moon), that can freeze into a stone-cold slab of pure malice. Park’s ominous charisma could have been its own hurdle for Mr. Kim, but he skillfully marshals the character to the story’s good and just lets that big moon glow into a long night that you’re sorry to see end.