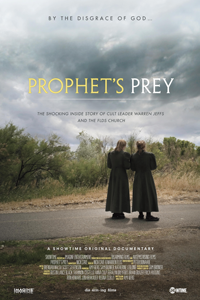 In her devastating 2006 documentary “Deliver Us From Evil” and last year’s controversial Hollywood expose “An Open Secret,” director Amy Berg brilliantly uncovered the face of sexual deviance in corridors of power. She does it again to deeply disturbing effect in “Prophet’s Prey,” a gripping, authoritative account of the myriad abuses of Warren Jeffs, the currently incarcerated leader of the Fundamentalist Church of Jesus Christ of Latter-day Saints. Berg’s interviews with past members of the polygamy-practicing Mormon denomination make for damning testimony, but the lasting power of “Prey” is its grim insight into the mentality of the deceived, and its despairing recognition that spiritual and psychological bondage doesn’t end simply by putting a monster behind bars.

Premiered at Sundance in advance of its Showtime airdate, Berg’s film didn’t kick up quite the same fuss as Alex Gibney’s “Going Clear,” the festival’s other incendiary takedown of a dangerous cult; “Prey’s” commercial impact looks to be slim by comparison, not least because the FLDS Church lacks the Church of Scientology’s worldwide reach and explosive cultural profile. Nor have Jeffs’ abuses generated as many headlines as the rampant cycles of abuse uncovered within the Catholic Church (which Berg tackled in “Deliver Us From Evil” and Gibney documented in “Mea Maxima Culpa: Silence in the House of God”). All of which makes Berg’s skillful and scrupulous examination that much more essential, especially in light of its chilling implication that Jeffs continues to wield enormous authority over his flock, which numbers about 6,000 to 10,000 members across the U.S.

Berg begins with a brief animated overview of the Church of Jesus Christ of Latter-day Saints proper, whose renunciation of polygamy in 1890 led to the emergence of the FLDS movement, the seat of which was until recently located in Short Creek, Ariz., on the border with Utah. As outlined by Jon Krakauer, author of the 2003 book “Under the Banner of Heaven: A Story of Violent Faith” and the chief outside expert here, the church’s long-standing practices include the subjugation of women, near-total separation from the outside world, and blind deference to a prophet-leader descended from the Jeffs clan’s “royal” bloodline. Television, movies and other forms of worldly media are strictly banned; children’s education is limited to church history and little else; and women wear prairie dresses and are often drugged into docile submission. The ratio of wives to husband can soar as high as 50 to 1, sometimes even higher.

Restrictive and backwards as this state of affairs will seem to the viewer, Berg’s interviewees concede that things became far worse with the rise to power of Warren Steed Jeffs, who assumed leadership of the church after his father, Rulon, died in 2002. (A rumor of foul play is raised but never corroborated.) Taking charge of his father’s many widows wasn’t enough to satisfy Jeffs, who would regularly call young children into his office and rape them behind closed doors, according to the testimony of Ron Rohbuck, the church’s former head of security, and Jeffs’ nephew Brent, whose disgust is palpable as he bravely describes his firsthand experience of abuse. Janetta Jessop, who became Jeffs’ 63rd wife at age 16, recalls the nightly ritual of lining up with his other wives in order to kiss him good night, one by one. By far the most horrific and irrefutable testimony here is a single audio clip that plays over a black screen, in which we hear evidence of Jeffs performing what sounds like an act of ritual consummation with a 12-year-old girl.

Shocking as these revelations are, what makes “Prophet’s Prey” so unsettling is the sense that Jeffs didn’t even require the usual veil of secrecy to act as he did, given not only the church’s porous boundaries between pederasty and marriage, but also his assumed status as God’s earthly representative. Neutralizing the threat of male protest by stripping men of their priesthood, and taking advantage of a culture that already treated women like chattel, Jeffs lured his entire membership — which included much of the local law enforcement — into a state of mindless complicity, fostering an environment where his word was law and, in the words of one interviewee, “You kowtow or you’re out.”

As others note here, Jeffs preyed on his people not just sexually but also spiritually and financially, forcing them to sacrifice their wealth to the church as proof of their faith and devotion. The FLDS leadership was especially ruthless at using news headlines to manipulate their flock into cowering submission, using such outside “threats” as Y2K and the 2002 Salt Lake City Olympics to suggest the day of God’s judgment was near — all the more reason for them to give up everything they owned and even more rigorously cut themselves off from the outside world. And when the time drew near for Jeffs to go on the run and move his operations out of the “Uzona” area, he had more than enough resources to do so, relocating to an expensive 60-acre compound in the Colorado Rockies. (Krakauer gets the film’s best line when he dryly notes, “Warren has really good taste in real estate.”)

Berg frequently breaks up her talking-head footage with overhead shots of the FLDS Church’s Arizona/Utah border settlement, located in a sparsely populated region near the Grand Canyon (scenically lensed by d.p. Peter Donahue). These shots are accompanied on the soundtrack by Nick Cave and Warren Ellis’ brooding score, as well as chilling excerpts from Jeffs’ sermons, read aloud by the man himself. In lieu of actual footage from inside the community or interviews with active members, it’s a repetitive but insinuatingly effective device. Elsewhere, we hear the low, dangerously soft tones of Jeffs’ voice in occasional clips of him repeatedly invoking the Fifth Amendment during his interrogation at the Texas prison where he now resides.

The long, twisty process by which the authorities finally caught up with Jeffs is related here with the breathless, blow-by-blow tension of a thriller, narrated by Krakauer and private investigator Sam Brower with scrupulous detail and a lively sense of outrage. Among other things, the viewer comes away from “Prophet’s Prey” with a grudging admiration for Jeffs the criminal mastermind, who remained one step ahead of the law even after he wound up next to Osama bin Laden on the FBI’s most-wanted list. But it’s the film’s key achievement — and its most significant contribution to the reportage around the FLDS Church — that it denies us the comfort of thinking anything has changed simply because Jeffs is serving a lifetime prison sentence (plus 20 years), a deserved punishment that nonetheless has had the effect of turning him into a Christlike martyr in the eyes of his followers. The wounds that Jeffs inflicted run unknowably deep, and to her credit, Berg isn’t content to give us a figure of exceptional evil; she would rather have us contemplate the deluded, unexceptional humanity that allowed a predator this monstrous to flourish.