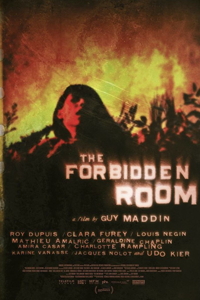 The virtues of baths, the agonies of broken and rebroken bones, the pressures on doomed submarine seamen, the heroics of an enamored woodsman, and other chimerical and esoteric tales swim around like a head-swirling fever dream in Guy Maddin’s latest oddity, “The Forbidden Room.” A masterful rendering of the outré Canadian auteur’s fascination with arcane fables, silent-era tableaus, the subconscious and its bizarre desires, the delirious movie may be the director’s strangest and best film to date.

Dreams, literal and figurative, are an integral part of the human experience, and thus a vital part of cinematic perspective and language. Many filmmakers evoke the myriad qualities of dreams — be it nightmares, confusion, or wondrous slow-motion abstraction. And film critics often observe the dreamy qualities of movies such as the pensive, sun-dappled adolescence often captured by Sofia Coppola, or the haunted qualities of a filmmaker like David Lynch. But perhaps no one captures the surreal, narcoleptic madness of our unconscious mind quite like Maddin — the discursive tendencies, the hazy ephemera, and the peculiar sense of chaotic humor that often come with it.

Maddin’s eleventh feature continues down the iconoclastic filmmaker’s singular path, free of commercial concerns or any overtures towards mainstream acceptance. Given the Order of Canada in 2012 — the highest honor a civilian can receive — the acknowledgement is a rightful testament to the filmmaker’s true artistry, but perhaps an ironic reminder that maybe one in every ten thousand Canadians could pick him or one of his films out of a line-up (or Americans for that matter). He is the country’s sacred jewel of a treasure, the mad scientist that no one is actually aware of. Ironically, this fateful lot sounds awfully like the tragic-comedic plot of one of his films.

Maddin’s maddening, yet wonderfully eccentric movie is difficult to follow in a linear (or even traditional) sense, and you shouldn’t even try. The movie constantly folds in on itself the way dreams suddenly absolve themselves from telling the punch line. Themes and ideas refract like a prism; new surprises are unveiled like Matryoshka dolls. The key joy to the kaleidoscopic movie is experiential; soaking in the tub of Maddin’s genuinely outlandish tale and pruning in its delirium.

So articulating what “The Forbidden Room” is really about is mostly a fool’s errand, other than maybe a voyage to explore dark fears through the vessel of the unconscious. The movie’s loopy vignettes only work on dream logic — just as the viewer settles into a milieu a new one rolls in like gauzy fog. And like his previous films, there’s a mania and madness to the film. “The Forbidden Room” acts like a dream that’s both ultra-vivid and yet obscure — it’s main through line about a woodsman attempting to save a damsel in distress which eventually morphs into a story about an amnesiac flower girl cum singer. Or something like that anyhow. That’s to say nothing about the forest bandits, the lust specialist, the horror hospital, and the flapjacks that act as oxygenated salvation throughout.

A free flowing technicolor-saturated extravaganza, Maddin’s monomaniacal movies have always been marked by their photochemically grainy and corroded look, but “The Forbidden Room” is even more ambitious in this regard, taking on the qualities of a sulphuric lava bath. Rear and forward projection overlap while superimpositions fade together like forgotten memories. Co-directed by Evan Johnson, a proactive student that Maddin took under his wing, the filmmaker’s movies have always tipped their hat with obsessive fervor to the lost, forgotten, and silent era of movies, as if fantasizing aloud in film is a kind of ghostly fan fiction influenced by Sergei Eisenstein, Eric Von Stroheim, Josef von Sternberg, and Carl Theodor Dreyer. “The Forbidden Room” and its concerns aren’t very different. Maddin’s films have always featured a degraded texture to them — as if shot on film poorly stored in the vaults of abandoned RKO facilities — but 'Forbidden Room' takes the idea of emulsion decay to a dreamscapey next level.

One could argue that Guy Maddin has been making a version of the same film over and over again successfully, and “The Forbidden Room” throws no shade on this thesis. All the familiar Maddin elements are there: throbbing eroticism, the absurdism, the phantasmagorical mania, the Stan Brakhage-esque erosion of filmy fabric, the stark German expressionist bent, and the Grand Guignol sense of grotesque melodrama. It’s akin to a greatest-hits-collection that actually may outshine the classic album.

Soporific, Maddin’s movies are the type you actively dream in, fade into contemplative digressions of your own life, and perhaps doze off in briefly, but such is the hypnotic effect. This semi-conscious state is integral to the Maddin experience, and perhaps no other filmmaker can induce the drowsy state of closing eyelids so perfectly.

At two-hours-and-ten-minutes in length, it’s a testament to how mesmric Maddin’s phantasmagorical experience is, given that its maybe 30 minutes too long. “The Forbidden Room” is overwhelming, an overstuffed brain full of information that spills over like ejaculative body fluids or magma from one of the movie’s many volcanoes. While diaphanous form doesn’t it lend itself to an exorbitant running time, its lusty, full-bodied qualities are still extremely potent.

Not for mainstream consumption (and if so, it should come with a warning lable), “The Forbidden Room” is a cinephile’s delight, another Maddin dream fantasia that’s visually distressed, suffused in feverish melodrama, and strangely poetic. Surrender yourself to its demented genius. “The Forbidden Room” will trap you in its bewitching spell, and you’ll be better for it.