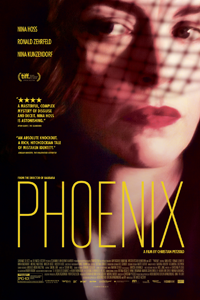 In Christian Petzold’s new film, Phoenix is the name of a Berlin nightclub where Nelly Lenz goes searching for her husband, a piano player she calls Johnny. World War II has just ended, which suggests that “Phoenix,” the title of this compact, haunting thriller, might have other, larger, metaphorical meanings as well. In a few years, Germany will ascend from the ruin of military defeat into an era of political stability and economic growth. Nelly, a Jewish singer who survived the Nazi death camps, is undergoing her own tentative rebirth — her face has been reconstructed after it was damaged by a gunshot wound — and her friend Lene (Nina Kunzendorf) encourages her to prepare for a new life in Tel Aviv.

But Mr. Petzold, a fixture of the Berlin School of historically informed, emotionally challenging realist filmmakers, is more interested in the ashes of the past than the bright plumage of the future. He gravitates toward ethical shadows and ambiguous states of feeling, using film noir techniques as a tool kit for probing dark regions of German history. Nina Hoss, who plays Nelly, has, since 2007, starred in four of this director’s features — “Yella,” “Jerichow,” “Barbara” and now this one — and seems to function for him as a combination of muse, alter ego and personified sensibility. Quietly charismatic, able to flicker from steeliness to desperation with an eye movement or a hand gesture, Ms. Hoss embodies Mr. Petzold’s fluctuating idea of postwar Germany itself: vain, guilty, vulnerable, confused.

Nelly, a victim and survivor of her country’s worst era, suffers from an especially acute form of confusion. She is desperate to find Johnny (Ronald Zehrfeld), even though — as we and Lene discover before Nelly does — he divorced her during the war and denounced her to the Gestapo. When she does run into him, he insists on being called Johannes and doesn’t recognize her, thanks to the plastic surgery and also, perhaps, to his own guilty conscience.

But he does decide that Nelly, who calls herself Eva in his presence, is a close enough match to impersonate his dead former wife. He is eager to get his hands on her estate, which is being held by Allied authorities, and he rehearses Eva in an elaborate and dismaying ruse. They will stage a reunion for the benefit of their old friends, collect the cash, split it and go their separate ways. It’s hardly the worst or the strangest scam to be contemplated in the chaos of a defeated, occupied city. Nelly agrees to Johnny’s plan, and it’s hard to tell whether she is passively going along with it out of love, longing and denial or pursuing a hidden agenda of her own.

Mr. Petzold is not the kind of director to indulge in showy homages, but his films are nonetheless steeped in the cinematic styles and genres of the past. “Jerichow” was a reimagining of “The Postman Always Rings Twice.” “Barbara,” set in East Germany in the 1980s, was a suspenseful romantic melodrama, and in both cases Ms. Hoss evoked the blond hauteur and old-Hollywood heat of Lana Turner. With its themes of suppressed desire and mistaken identity, “Phoenix” has more than a touch of “Vertigo,” but instead of Hitchcockian psychological puzzles, it explores unsolvable and perhaps unspeakable moral conundrums.

Or at least it tries. Never less than intriguing, coolly intelligent and flawlessly paced, “Phoenix” often feels trapped in the logic of its conceit. Neither the full horror nor the absurdity of Nelly’s situation registers, partly because the self-conscious genre touches keep her story at a distance. Mr. Petzold has made a suave and suspenseful entertainment that doesn’t seem entirely sure that it wants to be — or is able to be — more. It comes closest at the very end, in a final scene that infuses an old popular song with the full weight of cruelty, betrayal and hope.