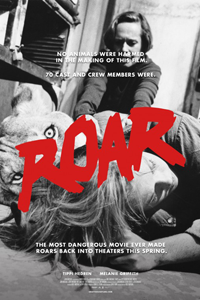 Is it possible for a movie to change genres decades after the fact? The answer, seemingly, is yes. Roar, the brainchild of actress Tippi Hedren (The Birds) and then-husband Noel Marshall, was released in 1981 as a work of fiction. Looked at that way – in terms of plot, character, and structure – it's easy to see why the film flopped. It really doesn't succeed on any of those levels. But once you know the story behind the production, Roar works magnificently as a documentary about a bunch of sincere, yet misguided, Hollywood types who did something massively irresponsible and captured it all on camera. The film, which is now back in theaters thanks to Drafthouse Films, is the craziest, most breathtakingly bizarre motion picture you are ever likely to see. Imagine Mutual of Omaha's Wild Kingdom as reimagined by Stephen King.

On a fictional level, Roar is about a wildlife preservationist named Hank (Marshall) who lives in Africa among a large assortment of wild animals, most notably lions, tigers, and jaguars. He's fighting to protect them from poachers. Hank hasn't seen his wife Madelaine (Hedren) or their children (played by the couple's real-life clan, John Marshall, Jerry Marshall, and eventual Oscar nominee Melanie Griffith) for a while, so they travel to his compound for a visit. While he's out in the field, they're left in his sprawling home with dozens of large cats, who proceed to terrorize them. The movie ends with a message about the importance of protecting animals, set to a cheesy ballad. No great shakes, really.

On a documentary level, the disclaimer in the publicity material tells you what's so amazing about Roar:

"No animals were harmed in the making of this film. 70 cast and crew members were."

Murray and Hedren, well-known animal right activists, put themselves, their children, and other actors in the middle of real wild animals, filmed what happened, then crafted a story around it. Murray even includes an onscreen note saying that since the animals did whatever they felt like, it was only fair for him to share writing and directing credits with them.

We're not talking about well-trained animals standing in proximity to actors, with safety precautions all around; we're talking about completely wild beasts surrounding, and often attacking, the vulnerable cast members. Some scenes, such as one where Hank's beasts get riled up while he tries to fend off poachers, shows the actors getting bitten and shedding real blood onscreen. Murray-as-Hank, at one point, is tackled by about eight or ten massive lions, like a football player at the bottom of a pile-on. Later, poor Melanie Griffith is pinned down by one of the creatures. We can visibly see it gnawing on her midsection before clamping onto her face. The actress required facial reconstruction surgery as a result.

Roar has a scene where Siberian tigers are driven in a convertible. Another tiger sinks a rowboat, leaving its passengers scrambling for dry land. A zebra is torn apart by lions, its body parts carried in different directions for consumption. A big cat learns to ride a skateboard. A jaguar licks honey off Tippi Hedren's face. (Stop and think about how badly that could have gone!) The sights are almost impossible to believe. You literally cannot avert your eyes from this thing.

Every single person shown on screen is clearly injured at some point, as these wild animals “improvise” around them. Many, many scenes make you wonder about the sanity of those involved. For instance, one of the young Murrays climbs into an icebox, while a lion yanks the door open and begins violently pawing at him. It takes a certain type of dedication to enter a confined space and allow a ferocious animal to come at you. Cinematographer Jan de Bont (who went on to direct Speed and who was scalped by a lion during production, requiring 120 stitches in his head) races to keep his cameras on the unpredictable action throughout, and he succeeds.

There is something absolutely hypnotic about this movie. Again, it doesn't work on a level of fiction. You won't care about the “story” or characters. There is, however, great drama in viewing people being chased, tackled, bitten, and mauled by some of the most beautiful, deadly creatures on the face of the earth. In scene after scene, Roar ramps up the crazy factor, putting its cast in increasingly dangerous situations. It is alternately exciting, funny, scary, fascinating, and utterly bewildering. Hedren and Marshall thought they were doing something important. Instead, they were risking their own safety, as well as the safety of everyone else. As an example of humans foolishly thinking that wild animals “get” and “respect” them, the movie is every bit as effective as, say, Werner Herzog's Grizzly Man.

It's a miracle no one got killed making this picture. It's another miracle that Roar can once again deliver its mind-blowing impact to audiences.