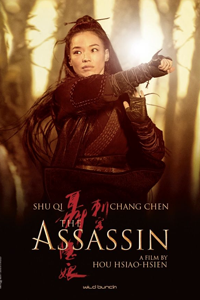 All it takes to change the temperature of a scene in The Assassin is a softly billowing brocade of silk. The first film in seven years from the Taiwanese master Hou Hsiao-Hsien is an immaculate treasure box of light, texture and movement. It is one of the most purely beautiful films I have ever seen, and a late-breaking, powerhouse contender for the Palme d’Or here at Cannes.

For the first time in his 35-year filmmaking career, Hou is working in the wuxia genre, which might be described as period-drama martial arts – a genre that flourished in Hong Kong in the Sixties and Seventies, and enjoyed a “respectable” resurgence around the world in the last decade, through films such as Ang Lee’s Crouching Tiger, Hidden Dragon and Zhang Yimou’s Hero.

If you’ve seen swordsmen and/or women bounding through a bamboo forest, you’ve seen wuxia – yet you’ve almost certainly never seen it carried off with quite this degree of heart-bursting delicacy and refinement.

There’s a little forest-bounding here, but the martial arts sequences are relatively few and far between, and are aestheticised to dizzying extremes. One sword fight plays out at a distance, glimpsed through a screen of trees; another plays out in a snow-flurry of close-up swipes and swishes. What combat there is looks less like choreography than calligraphy, the warriors’ bodies swirling through shot like an ink-brush over parchment.

The majority of the film, an adaptation of a seventh-century Chinese legend about a female assassin charged with restoring balance to the crumbling Tang Dynasty court, is more static – except static is entirely the wrong word to describe the shimmering, painterly tableaux in which its (intentionally) opaque storyline plays out.

Silk curtains flutter and fall, candles glow, fires crackle softly in the grate. Every scene, every shot, has been composed with total, Kubrickian precision, and calibrated for maximum, breath-quickening impact.

Shu Qi, the star of Hou’s last film, Three Times, plays the assassin, Nie Yinniang, whom we discover was abducted from her noble family at the age of 10 to be schooled in the art of killing. In a brief, black-and-white prologue, she dispatches a man on horseback too quickly for the camera to catch, but then we move forward in time to a mission where her humanity unexpectedly gets the better of her: she spies her target with his young son sleeping on his lap, and can’t bring herself to go through with the kill.

To wring out Nie’s last few drops of compassion, her furious mentor (Sheu Fang-yi) sends her to kill her own cousin (Chang Chen, Shu’s Three Times co-star), the governor of Weibo. She stalks around his kingdom, clashing with guardsmen in forests, moonlit temples and by the sides of snowy lakes.

A shot of a panicked retinue sweeping through the temple outbuildings at night holding flaming torches provides a skin-prickling thrill of action though it plays out in near silence, while a landscape of a mirror-like pond at dawn, mist dancing on its surface, cranes lazily flying overhead, is stand-up-and-wolf-whistle beautiful.

But Hou wants to lower your heart rate, not raise it – and uses moments such as these as audio-visual pauses for breath between the tangled courtly intrigue. The soundtrack rarely gets more complex than a low drum-beat, which could almost be the controlled heartbeat of the assassin – or perhaps of the Chinese court itself.

At all times, image and sound are in perfect balance: the film has been shot in the boxy, Academy ratio, but a couple of times the image widens to show us a woman delicately strumming a zither, and the screen itself seems to be breathing out. This is a work of strange and subtle power, unlike anything else that has screened at Cannes this year, and an extraordinary comeback from a necessary filmmaker.