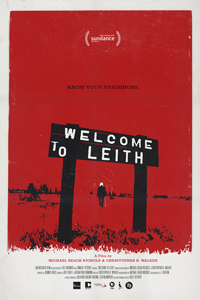 Tiny Leith, North Dakota looks as if it would make a fine setting for a horror film. Grossly underpopulated and generously dotted with crumbling abandoned buildings, there are plenty of places to hide in the town with no one ever being the wiser. But that’s not what happens in Michael Beach Nichols and Christopher K. Walker’s terrifying and insightful “Welcome to Leith.”

The Kickstarter-funded documentary chronicles an unsettling and hopefully brief chapter in Leith's history, when for a few months in 2012 and 2013 white supremacist Craig Cobb made it his goal to take over the entire town and turn it into a haven for his ideological kin. With a population of only twenty-four people (including kids), his idea, while scary and weird and horrible, was achievable, and that possibility is what makes “Welcome to Leith” sharply upsetting.

In late 2012, Cobb, who is considered “one of the top ten white supremacists in the United States” (you may wonder who compiles such lists, and “Welcome to Leith” introduces them, and their insights are invaluable), sent out a call to his brethren to descend upon Leith and make it their own. With land prices at an all-time low, he'd already started steadily snapping up plots of land around his home before anyone was the wiser, and it was only later that his shocked new neighbors began to understand what was unfolding around them and how little they could do about it.

Despite high-running passions, Nichols and Walker take a remarkably even keel in “Welcome to Leith,” spending nearly equal time with the bewildered Leith residents, who want nothing more than for this nightmare to be over, and Cobb and his supporters, who are frighteningly determined to consume the town with their hatred. The residents of Leith are presented as kind-hearted, hard-working people who were initially excited about having a new neighbor, and none of them were particularly concerend when Cobb made it clear he wanted to keep to himself (it is, after all, rural North Dakota). However, they were surprised when the Southern Poverty Law Center and their Intelligence Report publication started poking around, revealing Cobb’s plans to essentially stage a coup and take over the town’s close-knit council.

Although the story of Leith is incredibly specific (only a miniscule portion of the U.S. population will ever have to worry about a pack of white supremacists moving in next door), the emotions elicited as such are profoundly relatable. At its heart, “Welcome to Leith” is about change and how toxic decisions and beliefs can irreparably ruin bystanders’ lives. Why should the people of Leith have to change their existence to accommodate a hate group that wants to push them out of their long-time hometown?

As the months tick by, tensions in the town reach an all-time high, and it becomes impossible to imagine that anything Leith's townspeople can do will ever drive out Cobb and his minions, if only because everything the latter has done in pursuit of consuming the town has been technically legal. The film reaches a fever pitch when Cobb, imminently and obviously unreasonable, begins patrolling the town’s dirt roads alongside one of his deputies, loaded guns in hand.

The film, which initially seemed simply set on chronicling what was occurring in Leith, then hits upon a tangible narrative, as both Cobb and Kynan Dutton are addressed and charged with multiple counts of terrorizing their neighbors. As the people of Leith wait to hear if Cobb and Dutton will be sent to prison, passions continue to flare. Nichols and Walker, so adept at presenting both sides of the story, fail to capitalize on this decision, and the film continues to amble along at a relatively laidback pace. That the film ends without much in the way of a conclusion is an unwelcome shock, one that is oddly reflective of the mostly directionless final act. The story of Leith may not be over yet, but viewers will clamor for some kind of resolution, if only to help them sleep at night.