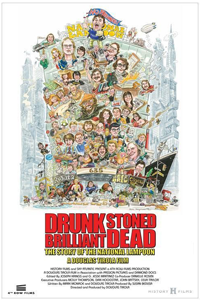 Some documentaries are important because they educate viewers on areas of life that they would otherwise know little about. For example, here’s Drunk Stoned Brilliant Dead: The Story of The National Lampoon, which performs the valuable service of informing today’s youth that the National Lampoon label used to be a symbol of quality, not a devalued brand name to be slapped on crappy movies.

The National Lampoon magazine began publication in 1970 as an offshoot of the Harvard Lampoon, which had amused students at that university for a hundred years. National Lampoon was like a darker, meaner, more adult version of Mad, and this doc (nimbly directed by Douglas Tirola) is bursting with glimpses of the magazine’s contents. It’s also crammed with new interviews with just about every key player who’s still alive: co-founder Henry Beard, art director Michael Gross, CEO Matty Simmons, and writers P.J. O’Rourke, Tony Hendra, Anne Beatts, and Sean Kelly, to name a few. Important dead figures like founding writers Doug Kenney and Michael O’Donoghue are remembered fondly (and otherwise) by colleagues who seem never to run out of funny stories to tell. Tales of Kenney and O’Donoghue’s adventures with drugs, alcohol, anger, depression, and brilliance are bittersweet reminders of how tormented some of the funniest people are.

The film traces National Lampoon’s evolution from popular magazine to media juggernaut, and shows how vast its influence was. First came record albums, then a radio show, then an off-Broadway stage show, all featuring sketches and songs written by the Lampoon folks and performed by nobodies with names like John Belushi, Chevy Chase, Christopher Guest, Bill Murray, Gilda Radner, and Harold Ramis. When Saturday Night Live began, in 1975, Lorne Michaels found many of his writers and stars in the Lampoon offices. National Lampoon’s first foray into the movie business, Animal House is also recounted, with memories from Kevin Bacon, Tim Matheson, and director John Landis.

We also see the decline of National Lampoon as a magazine in the 1980s, and as a filmmaking force after that. The film and its interview subjects rather pointedly say nothing about the financial concerns that led to the current lamentable situation, where the “National Lampoon” label can be applied to any movie that wants to pay the licensing fee. (For the record, the last real National Lampoon movie before the name was sold was Christmas Vacation.) Why dwell on the negative stuff that had nothing to do with the mad geniuses who first began it? Whether you’re familiar with the Lampoon magazine or just a fan of comedy in general, this is a thoroughly enlightening and entertaining homework assignment.