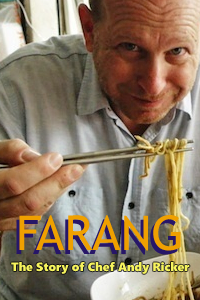 You might have seen Chef Andy Ricker on Anthony Bourdain’s “No Reservations” television series or read about him in the Lucky Peach or other food magazines. What distinguishes Ricker from most well-known chefs is his insistence that he is not a chef, just a curator of another culture’s culinary glories. In his case, a passion for authentically presenting Northeastern Thai cuisine expresses itself in his multi-city Pok Pok chain of restaurants and his other Thai restaurants in Portland.

Farang, the Thai word for white foreigner and Ricker’s nickname in Thailand, explores Ricker’s “obsession with a country, its culture, and food practices.” It also follows his journey from childhood to the current era.