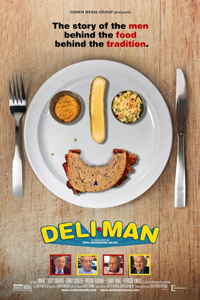 Deli Man is a documentary that looks into Jewish culture by exploring the history and cuisine of delicatessens and the people who own and operate them, deli men.

For some, delicatessen food is close to a religious experience. A tender, crumbling cut of corned beef steeped in its juices. A full-bodied garlic dill pickle. Spicy brown mustard with grain. A blintz that melts in your mouth like a creamsicle on a summer’s day. Recipes and culinary garnishes from Hungary, Poland, Russia, Romania that flowed into late 19th and early 20th century America and soon became part of an American culinary and cultural vernacular – Deli.

The principal guide of DELI MAN is the effusive and charming Ziggy Gruber, a third-generation delicatessen man, owner and maven (as well as a Yiddish-speaking French trained chef) who currently operates one of the country’s top delis, Kenny and Ziggy’s in Houston, Texas. His story – augmented by the stories of iconic delis such as Katz’s, 2nd Avenue Deli, Nate ‘n Al, Carnegie, and the Stage – embodies a tradition indelibly linked to its savory, nostalgic foods.

The story of the deli is the history, anecdotes and humor that once made one’s local delicatessen the virtual epicenter not only of food, but of family, laughter and community.