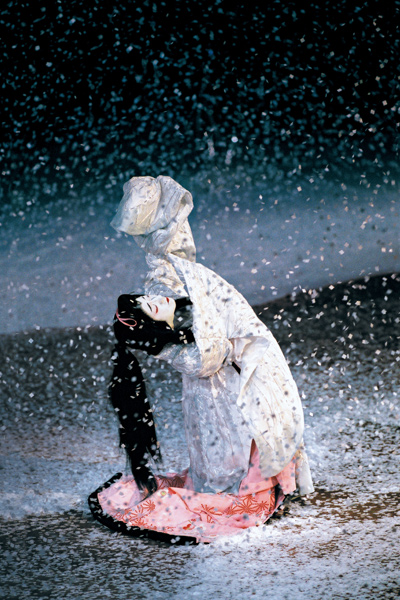 The set is a frozen pond in the middle of Winter. The music from the geza is the classic sound effect for falling snow. The spirit of the heron appears on a platform, dressed in white, solitary and silent. This dance is a series of transformations, done through costum changes using either the bukkaeri or the hikinuki techniques to switch the roles. The first change turns the dancer into a young maiden in love, dressed in a beautiful red kimono, who dances the joy of love in a lively atmosphere. Her love is a short one and the next section of the dance is no more about happiness but sadness and jealousy. The dance is getting darker and the final change brings back the spirit of the heron, who frantically dances, depicting the torments of hell and pleading for pity. The highlight of this section is an ebizori pose. Then the heron maiden collapses on stage, bringing the dance to a close.

Sponsored by The Japan Foundation, Japan America Society of Colorado, and C.U. Center for Asian Studies