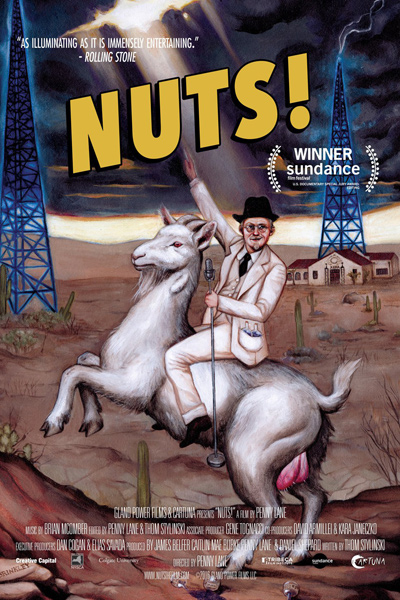 “Nuts!” is a highly entertaining documentary about Dr. John R. Brinkley, who became a national sensation in the late 1910s and 1920s for devising a cure for impotence. He transplanted part of goat testicles into men’s scrotums, and men reported serious results. This procedure, which Brinkley repeated many thousands of times, made him a millionaire and a celebrity.

At his height, Brinkley had his own nationally broadcast radio show, and he was so popular that he was apparently elected governor of Kansas, but fell short in the final count when authorities found ways to disqualify many of his ballots. In ways good and bad, his was a distinctly American story, and filmmaker Penny Lane uses a variety of techniques to bring out its strangeness and specialness.

Lane uses archival footage, voice recordings, live interviews, snippets from radio broadcasts, hand-drawn animation and, most bizarrely and effectively, an unreliable narrator. This narrator allows us to experience Brinkley as he was perceived in his time, and then to discover gradually the whole truth. It’s spoiling nothing to say that Brinkley was a con artist on a grand scale, but the meaning of his life is complicated.

At heart, “Nuts!” is a movie about sincere aspiration, both Brinkley’s and his patients.’ It’s about how con artists can succeed in America — and how they still succeed. It’s about the seductive power of a media-savvy opportunist in a time of mass communication, the dangers of that, as well as the heart’s desire of every phony to be real. And it’s about the long-lasting damage that comes of lies, how they can reverberate and poison the life of the liar and those around him.

From the movie’s first minute, viewers will know they’re in the hands of a sure-footed storyteller. Though the director tells the story through varied and complicated means, she never gets lost, because she knows what she wants to say and how the audience should be feeling at every moment. Lane develops a tone for “Nuts!” that is quite particular. The film is sardonic and absurdist, but it’s not cold. The tone allows for a feeling for the passage of the time and for a hard-to-explain undertone of sorrow.

Brinkley was a phony, but so was Harold Hill in “The Music Man.” As Americans, we understand this kind of guy, not just his appeal but the impulse behind his actions. It’s what makes this documentary hard to classify and Brinkley hard to dismiss.