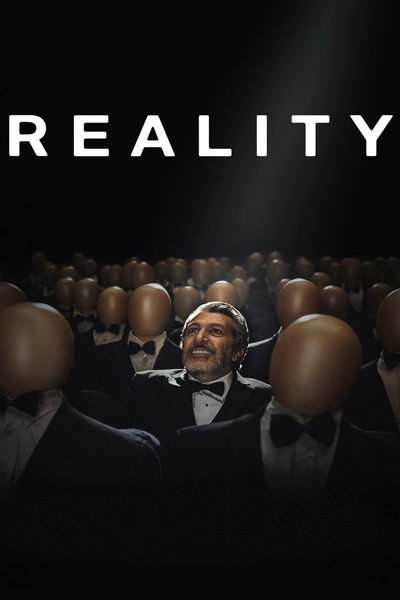 Quentin Dupieux's Reality follows several Los Angelenos as they gradually grow aware of their respective connections to one another, tonally suggesting a collaboration between Robert Altman and Miranda July on an adaptation of The Far Side.

The film's quasi-hero is Jason Tantra (Alain Chabat), a cameraman for an asinine talk show who's on the verge of landing a deal to direct a personal movie script for producer Bob Marshall (Jonathan Lambert), provided that the former, in a possible homage to Blow Out, can satisfy the latter with a perfect “Oscar-winning” groan to accompany the film's prospective horror set pieces.

Seemingly unrelated to this negotiation is a little girl who's actually named Reality (Kyla Kenedy), in a hint of the existential shenanigans to come. Reality follows her father as he kills and butchers a large hog who swallowed a blue video tape; fishing that tape out of a trashcan chock-full of the hog's guts, she becomes preoccupied with finding a VCR with which to watch it. Occasionally mixed up in Jason, Bob, and Reality's adventures are Dennis (Jon Heder), the host of said asinine talk show, Alice (Élodie Bouchez), a therapist married to Jason, and Henri (Eric Wareheim), an official at Reality's school whom Alice is treating.

The specifics of the stories barely matter. Dupieux derives suspense, or, more accurately, semi-engaged curiosity, from his portentous hinting around as to how the stories structurally connect; he's more concerned with the labyrinth than with the mice who wander it.

Dupieux's studied sense of inconsequence grows haunting. Reality sneaks up on you, its slightness partially an illusion. Like reality.