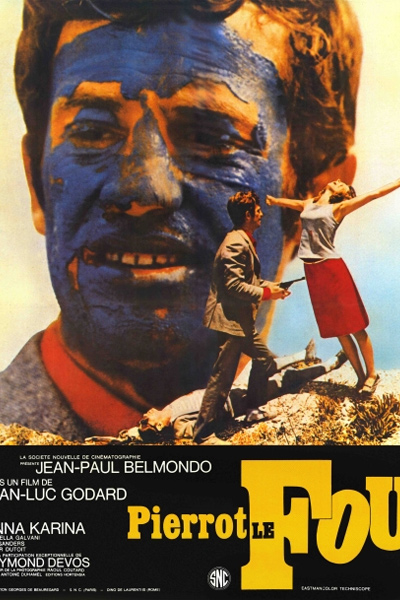 The Tourneés Festival is made possible with the support of the Cultural Services of the French Embassy in the U.S., the Centre National du Cinéma et de l'Image Animée (CNC), the French American Cultural Fund, Florence Gould Foundation and Highbrow Entertainment.
"I wanted to tell the story of the last romantic couple," Jean-Luc Godard said of this brilliant, all-over-the-place adventure and meditation about two lovers on the run (Jean-Paul Belmondo and Anna Karina).

Made in 1965, this film, with its ravishing colors and beautiful 'Scope camerawork by Raoul Coutard, still looks as iconoclastic and fresh as it did when it belatedly opened in the U.S. Godard's misogynistic view of women as the ultimate betrayers is integral to the romanticism in much of his 60s work--and perhaps never more so than here--but Karina's charisma makes this pretty easy to ignore most of the time.

The movie's frequent shifts in style, emotion, and narrative are both challenging and intoxicating: American director Samuel Fuller turns up at a party scene to offer his definition of cinema, Karina performs two memorable songs in musical-comedy fashion, Belmondo's character quotes copiously from his reading, and a fair number of red and blue cars are stolen and destroyed. (J. Rosenbaum, Chicago Reader)