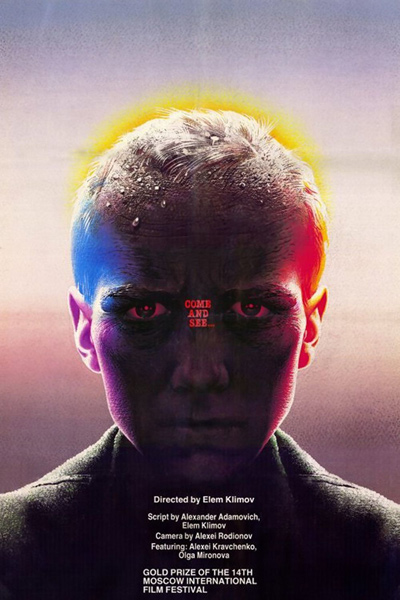 It's said that you can't make an effective anti-war film because war by its nature is exciting, and the end of the film belongs to the survivors. No one would ever make the mistake of saying that about Elem Klimov's "Come and See." This 1985 film from Russia is one of the most devastating films ever about anything, and in it, the survivors must envy the dead.

Florya, perhaps 14, lives with his family. It is 1943, Hitler's troops are invading the Soviet republic of Byelorussia, and Florya (Aleksey Kravchenko) dreams of becoming a heroic partisan and defending his homeland. He wants to leave home and volunteer. His family forbids him. But as events unfold, he leaves, is accepted in a fighting unit, forced to change his newer shoes with a veteran's worn-out ones and is taken under the wing of these battle-weary foot soldiers.

He is still young. He seems younger than his years in early scenes, and much, much older in later ones. At first he is eager to do a good job; posted as a sentry, told to fire on anyone who doesn't know the password, he challenges a girl scarcely older than he is. He does not shoot her; indeed, he never shoots anybody.

Many Russian films have depicted the horror of Nazism, because Hitler was a safe target and a convenient stand-in for political allegory closer to home. This film is much more than an allegory. I have rarely seen a film more ruthless in its depiction of human evil.

The principal Nazi monster in the film, S.S. Major Sturmbannfuhrer, is a suave, heartless beast not a million miles distant from Tarantino's Col. Hans Landa. He toys with an unpleasant little simian pet that clings to his neck. He is almost studious in his murderous commands. His detachment embodies power, which is the thing Florya never for a moment possesses throughout the movie. It is possible that Florya survives because he is so manifestly powerless. To look at him is to see a mind reeling from shock. One would like to think the depiction of the Nazis is exaggerated, but no. The final title card says, “The Nazis burned down 628 Byelorussian villages together with all the people in them.”

It strains credulity to imagine Florya surviving all the horrors that he witnesses, but there was a real Florya, and Klimov's script was written with Ales Adamovich; Klimov told Ron Holloway in a 1986 interview, “Adamovich was the same age as the hero in the film. He and his family fought with the partisans and witnessed the genocide perpetrated by the Nazis on Belarussian soil.” Klimov added that his film was shot in Byelorussia (now known as Belarus) near where the events took place, and that he used no professional actors.

I must not describe the famous sequence at the end. It must unfold as a surprise for you. It pretends to roll back history. You will see how. It is unutterably depressing, because history can never undo itself, and is with us forever.

I learn from IMDb.com that the film's title, seemingly so straightforward, has a bleak context. It comes from the Book of Revelation: “And when he had opened the fourth seal, I heard the voice of the fourth beast say, ‘Come and see.' And I looked, and behold a pale horse: and his name that sat on him was Death, and Hell followed with him. And power was given unto them over the fourth part of the earth, to kill with sword, and with hunger, and with death, and with the beasts of the earth.”