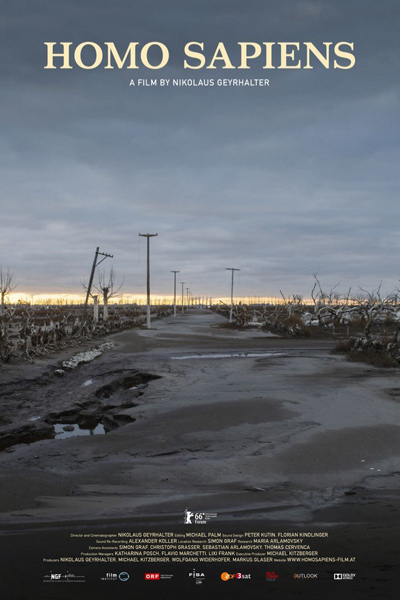 Here’s the joke—if you can call it that—of Homo Sapiens, the eerie and post-apocalyptic new documentary piece by Austria’s Nikolaus Geyrhalter: It’s got no people in it. Shot all over the world, the film offers a breathtaking array of abandoned places. None of them are identified (no narration, no text, no trace of human presence), though some are well-known: the Buzludzha Monument in Bulgaria, which resembles a massive Communist spaceship that sustained a crash landing; Japan’s Hashima Island, a nightmarish maze of concrete apartment blocks and stairways that was abandoned in the 1970s; the streets and shops of the Fukushima exclusion zone; the so-called Cavern Of The Lost Souls, a subterranean lake in Wales used to dump old cars. One almost wishes that Geyrhalter (Our Daily Bread) had come up with a less on-the-nose title. But then, what else could he call it?

Alongside these remnants of failed industry (this Chicago-based publication recognizes at least one place as nearby Gary, Indiana) and natural catastrophe are ghostly abandoned shopping malls, temples whose floors have been split by earthquakes, hospital basements full of rotting medical samples, deserted slaughterhouses, airplane graveyards, ship cemeteries. Anything that’s an example of culture, commerce, or know-how exists somewhere in ruins. There is a sick, Life After People-type thrill to seeing the spaces of our everyday lives—stores, offices, train stations—wrecked by years of overgrowth and non-maintenance. The fact that movies are a technology of motion makes them uniquely suited to capturing stillness; Geyrhalter takes full advantage, using vivid sound design and his own eye for striking static compositions to create haunting tableaux.

There is beauty in the abandoned, forgotten, and decrepit, in bubbles of rust and beams of light that cut through collapsed roofs, but that’s not what Homo Sapiens is after. Its only explanation for itself is that pesky title, which frames what follows as being about the human species—those tried-and-true questions of what we leave behind and whether the things we build are really an extension of ourselves. Cut off from human activity, they sure seem alien and mysterious, like traces of a lost civilization that we can never understand, even though it’s just us. Geyrhalter has made some more conventional documentaries (most recently the made-for-TV CERN, title self-explanatory), but his work has always had a spookiness to it. Here, he’s thinking spatially, using the screen to create an unsettling place where the audience can probe what the world created around them means and what matters, if anything. One might argue that 20 minutes or so is enough, but what Homo Sapiens offers in its succession of carefully framed shots is sometimes too tantalizing to resist. Pointedly, one of the abandoned places it visits is a movie theater.