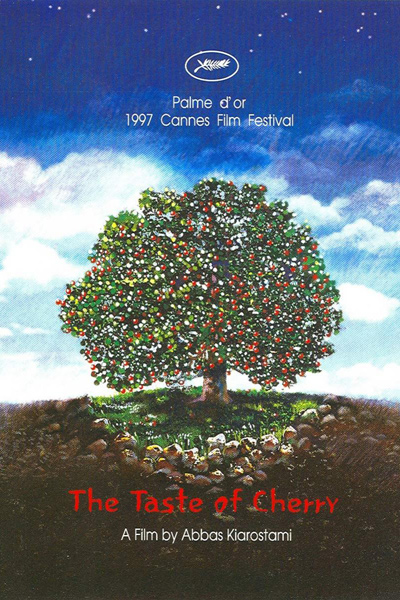 Taste of Cherry, by veteran Iranian director Abbas Kiarostami, is a most extraordinary movie. I can factually say that I have never seen another movie quite like it; at least not made in the past 3 decades. It has won the Palme D'Or at the Cannes Film Festival (shared with Shohei Imamura's The Eel). It has been proclaimed a masterpiece by The New York Times, The New York Daily News, Film Comment and Time Magazine, as well as internationally acclaimed filmmakers Jean-Luc Godard and Akira Kurosawa. It deserves comparison to some of history's most thoughtful and poetic films; Jean-Luc Godard's Vivre Sa Vie, Akira Kurosawa's High and Low, Ingmar Bergman's Persona, and Federico Fellini's La Dolce Vita.

Taste of Cherry begins deceptively simple. A man, who we later come to know as Mr. Badii (Homayon Ershadi), drives around. His face is sad and shaggy. He looks not terribly unlike Johnny Cash (ten miles of bad road). Unemployed men on the street ask him if he's looking for workers. He is, but none of them will do. We learn what the job is. Mr. Badii is going to take sleeping pills, lie down in a hole, and go to sleep. The [worker] is to come at 6 AM, help Mr. Badii up if he is alive, throw dirt on him if he is dead. There is a large sum of money as pay.

We meet more candidates for the job; a security guard, a studying seminarian, who argues religion with Mr. Badii, and finally, a taxidermist. The taxidermist tells a vivid story of how he almost committed suicide decades before, but was saved when he ate a mulberry. The taxidermist agrees to do the job.

At the mysterious end, of course, Kiarostami is simply saying, "life goes on." At first, my senses were jarred, but I soon realized that that's not important. What's important is me, and the others in the audience, and the people I'll meet on the street outside. Life goes on. It's a simple message, but stated powerfully and thoughtfully. On the other hand, we never find out why Mr. Badii wants to kill himself. He has money, and he seems healthy. His arguments for suicide are just as valid as others' arguments for life.

But it's not just the ending that gets you. Each and every image and sound is perfectly and vividly crafted. The shots are long and slow. We spend a great deal of time inside Mr. Badii's car, looking at him, looking at the passing countryside. We spend a great deal of time talking to people, mostly Mr. Badii asking questions, interviewing for the "job." Each of the characters has their own moral values, their own life story, their own opinions. They each seem like actual people. Even though they're speaking Farsi and I'm reading the subtitles, their language and attitudes seem alive and true.

At one point, Mr. Badii stops at a quarry and watches as giant machines move dirt around. It's difficult to describe, but these shots are exquisitely beautiful, even though we're only looking at dirt. The whole film is like this; shots of barren hills, sad people, and lonely towns, but beautiful. Most directors try to either make self-consciously beautiful shots, or try to imbue their shots with "meaning." Kiarostami has made meaning and poetry out of what seems like nothing.

Akira Kurosawa said about the films of Abbas Kiarostami: "words cannot describe my feelings about them. I simply advise you to see his films."