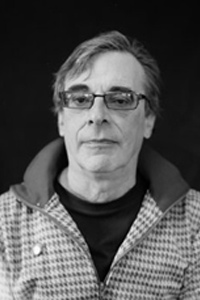 Saul Levine was born in New Haven Connecticut and is a maker and advocate of avant-garde film and more recently video. He is currently a Professor at MassArt where he has taught for over 35 years and programmed the longstanding MassArt Film Society. His work has been screened nationally and worldwide and mostly recently has been honored at the L’ÂGE D’OR FESTIVAL 2015 Brussels and at the (S8) Peripheral Film Festival 2016 Coruña, Spain.