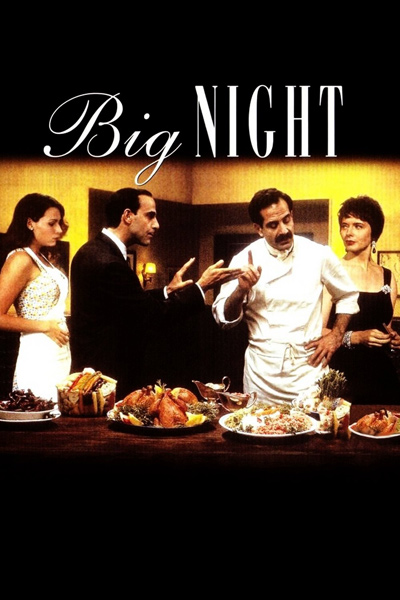 "'Big Night" is a small movie -- and that's its subtle charm. Taking its sweet time to serve up a simple story, this modest gem delves into the lives of two Italian immigrant brothers who seek American-style success by opening a restaurant in New Jersey.

The brothers, played by Stanley Tucci (from TV's "Murder One") and Tony Shalhoub ("Wings"), have other ambitions, too -- they want to give real meaning to the Italian culture they love. But that love drives a bittersweet wedge between them.

"Big Night" is both a delightful story and a great food movie that ranks with "Like Water for Chocolate" or "Babette's Feast." When it serves up a centerpiece dinner party of extraordinary gastronomic creations, viewers may want to hit the exits in search of food. The mildly amusing tale is set in the 1950s, when Italian restaurant fare meant spaghetti and meatballs, and Italian culture was popularly characterized as noisy, overdecorated and devoted to gold-plated schlock. Louis Prima's peppy singing and Rosemary Clooney's brash "Mambo Italiano" are on the soundtrack.

Brothers Primo (Shalhoub) and Secondo (Tucci) Pilaggi open their Paradise restaurant in an innocent belief that traditional food from their native land will please customers. But they're way ahead of their time. Primo, the elder, is a master chef, an artist turning out divine creations. He knows no other way. Secondo has a different view. Armed with a wily business sense, he's willing to compromise. A platter of spaghetti, a helping of meatballs, what's the big deal? He believes concessions to popular taste will help build business -- and eventually customers will learn to appreciate his brother's to-die- for risotto.

The Paradise, meanwhile, is struggling to survive. Rival restaurateur Pascal (Ian Holm), a vulgar man whose garish eatery is always packed, offers to come to the rescue. He promises that icon Louis Prima will show up for a private party with his band, and the brothers suddenly have a chance to parade their finest dishes -- the big night they've been waiting for.

Shalhoub and Tucci, who co-directed "Big Night" with Campbell Scott, are wonderful. It's a tickle to see them on the big screen, especially to see Tucci playing someone other than a slimeball. In "Big Night" he is entirely convincing as the kid brother who at heart believes in Primo's artistry. Shalhoub gives his character a captivating soulfulness. Isabella Rossellini is terrific in a comic role as Pascal's partner. Minnie Driver adds sparkle as Secondo's girlfriend, and co-director Scott ("Singles") plays a Cadillac salesman for all he's worth. The movie mostly lets its small flavors -- a gesture, a look, a gorgeous platter of vegetables -- simmer."