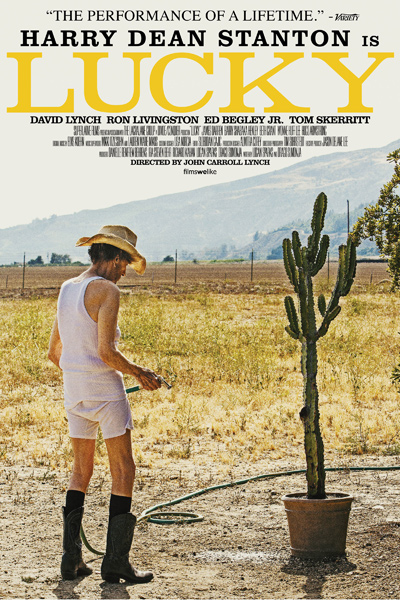 Harry Dean Stanton passed away on September 15, 2017. Lucky was his final starring role.

"Let’s start at the top of the pile with the fantastic directorial debut of John Carroll Lynch, an actor who always struck me as someone who cared about who he worked with and clearly was paying attention to former collaborators like Martin Scorsese, David Fincher and Joel Coen. Lynch knows how to frame a shot and tell a story that actually feels like the recent work of a filmmaker with whom he has yet to work, Jim Jarmusch. There’s a similar, shambling, everyday poetry to Lynch’s “Lucky,” a beautiful showcase for the 90-year-old Harry Dean Stanton, giving one of the best performances of his remarkable career. With supporting work from other icons as diverse as David Lynch and Tom Skerritt (“Alien” reunion!), “Lucky” is a film about both not much at all and, well, pretty much everything.

Stanton plays the title character, a lifelong bachelor who has an existence built on routine. He’s been doing the same Yoga routines every morning for decades, goes to the same diner, and ends his days at the same bar. He’s been smoking at least a pack a day for most of his life and if lung cancer hasn’t gotten him yet then it probably won’t. He watches the same game show every day while he does his crossword puzzles. All he has in his fridge is milk—he eats his meals at the diner and drinks his booze at the bar. As his days are inevitably coming to a close, he begins to consider the end, and what his life has meant.

Don’t worry. This is not Harry Dean Stanton’s “The Bucket List.” It’s a subtle, episodic chapter in a long life, and it’s a showcase for an actor who has never gotten the credit or attention he deserved. Even at 90, Stanton is phenomenal here, bringing a lot of his own life to the character (one imagines) and making him feel completely three-dimensional. The hints at Lucky’s back story—pictures on the shelf, stories he tells about WWII—are plentiful enough that we truly get the impression that he is not a Hollywood creation but a real person. And the spiritual/religious issues in “Lucky” are fascinating. Lucky sees a lot of things practically—he thinks “Deal or No Deal” is ridiculously convoluted, for example, and is compelled by the definition of realism—but we all get a little philosophical when we know the end is near. This is one of the best performances of 2017, presuming it comes out this year, in a film that I think a lot of people will be talking about."