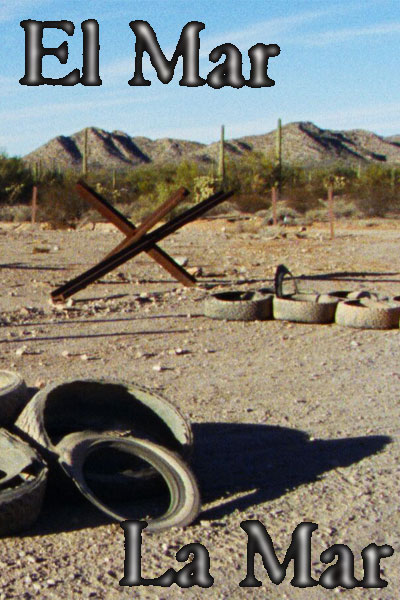 Free Screening made possible by CMCI

The sun beats down mercilessly on all those who cross the Sonoran Desert between Mexico and the United States. Aside from the few people who live here, it’s the poorest of undocumented immigrants that make the crossing, who have no choice but to take this extremely dangerous route, followed by border guards both official and self-appointed. The horizon seems endlessly far away and deadly dangers lurk everywhere. It’s best to move under the cover of darkness; during the day, being exposed to the heat and sun is enough to make animals and humans perish. Their traces and remains accumulate, fade, decompose and become inscribed into the topography of the landscape, making the absent ever-present as life and death, beauty and dread, hostile light and nights aglitter with stars and promise all continue to exist alongside one another.

El Mar La Mar masterfully weaves together sublime 16mm shots of nature and weather phenomena, animals, people and the tracks they leave behind with a polyphonic soundtrack, creating a cinematographic exploration of the desert habitat, a multi-faced panorama of a highly politicized stretch of land, a film poem that conjures up the ocean.

Sponsored by The Center for Documentary and Ethnographic Media, Roser Visiting Artist Program, Department of Anthropology, Department of Art, and College of Media Communication and Information