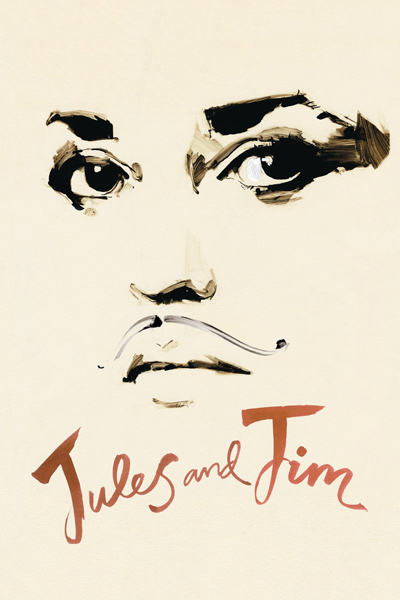 Along with Godard’s Breathless (1960), François Truffaut’s Jules et Jim (1962) is probably the essential French New Wave film—and it’s possibly even more essential than Breathless, since it had a greater impact on content. Where Godard’s film was essential in defining the style of the New Wave movement, Truffaut’s defined both style and theme in ways that still seem fresh today—and unlike many New Wave films, it never once threatens to become a parody of itself. The staples of French cinema from that era have been so parodied in the intervening years that the originals sometimes verge on unintentional comedy. Somehow—and I suspect it’s because the film is so generously alive—Jules et Jim has escaped that, despite the fact that iconic aspects of the movie have been parodied (Marie Dubois’ famous cigarette-smoking “steam engine,” for example). In essence, the film is little more than a love triangle concerning two young men—Jules (Oskar Werner) and Jim (Henri Serre)—who are both in love with the same girl, Catherine (Jeanne Morreau). But Truffaut takes all this to places such stories had almost never gone before. (The possible exception I can think of is Ernst Lubitsch’s Design for Living back in 1933.)

Truffaut doesn’t beat the theme to death, but the film is rife with gay subtext, being as much about the “romance” between Jules and Jim as it is about their love for Catherine. Where previously the two had happily shared girlfriends, Catherine proves the exception, thereby changing the dynamic of the relationship. There’s a strange precognitive aspect to the film, since it seems to be addressing the soon-to-emerge “free love” aspect of the latter half of the ‘60s (and even warning against its downside), since the relationships in the film that are forged in 1912 and interrupted by World War I are easily paralleled by the 1960s specter of Vietnam. Perhaps this is all unintentional, or perhaps it’s the film’s own sense of dread about what was coming, but the foreboding gives Jules et Jim even greater emotional punch today than it had in 1962. If you’ve never seen it, do so immediately. If you have, it’s always worth another look. — Ken Hanke, Mountain Xpress