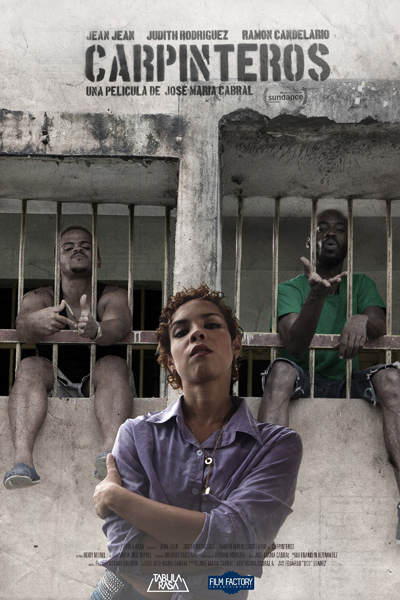 José María Cabral’s arresting drama “Woodpeckers (Carpinteros)” could be called love in a pressure cooker, but that would be understating its vivid textures and palpable vitality. The film was shot on location in the Dominican Republic’s Najayo and La Victoria prisons, where the stifling claustrophobia of those settings infuses every frame.

Julián (the Haitian-Dominican actor and filmmaker Jean Jean), who has been convicted of theft, is shorn of his resplendent dreadlocks when he is sent to Najayo, where he quickly learns the sign language — “woodpecking” — that the inmates employ to communicate and flirt from afar with the female inmates at an adjacent penitentiary. (An elevated fenced enclosure looks out at their athletic area.)

Julián also serves as a proxy for Manaury (Ramón Emilio Candelario), a hotheaded drug dealer, who has been barred from communicating directly with his incarcerated “girlfriend,” Yanelly (Judith Rodríguez). When Julián himself catches Yanelly’s eye, and she his, tensions escalate between Julián and Manaury, and the men are relocated to the even more oppressive La Victoria. There, a newly freed Yanelly visits as passions and a prison riot erupt.

The lean handsomeness and quiet authority of Mr. Jean is a perfect complement to Ms. Rodríguez’s passionate Yanelly, while the locations — and the presence of actual inmates — underscore the harsh boundaries the lovers struggle against. Their efforts to transcend their station leads to a stark climax that is a silent, anguished and haunting cri de coeur.