As I Open My Eyes 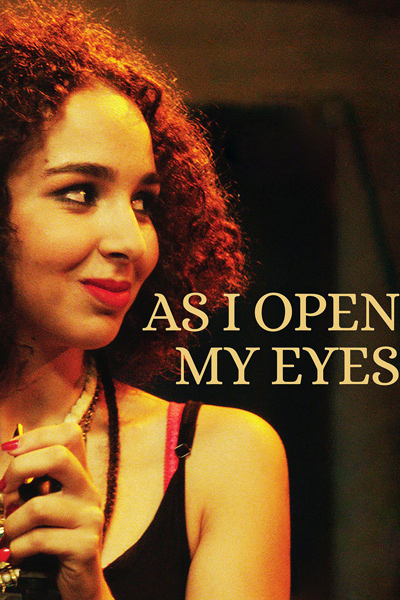 "'My country, oh my country, land of dust,' sings eighteen-year-old Farah (Baya Medhaffer) as stage lights halo her curls in blue. 'Your gates are closed, and bring misfortune.'

Following her alt-rock band through the capital’s garages and bars, As I Open My Eyes offers a view of Tunisia teetering before the Arab Spring. Farah loves performing so much that she can’t help smiling through the lyrics’ furious nihilism.

But for all her passion, it’s unclear whether she’s weighed the risks of these punk provocations. “We all have worries!” her handsy lutenist boyfriend (Montassar Ayari) scoffs. “Why else would we play music?” Those around Farah strive to protect her from the adult world that we glimpse here only in abrupt, sometimes frustrating flashes. That blissful ignorance feels uneasy, then unsafe.

Director Leyla Bouzid’s camera establishes an easy intimacy, which soon gets interrupted by a cooler eye: a side character’s camcorder. Is his footage recording memories or gathering evidence? Here, adolescent drama takes on a dangerous political edge, and those anthems about oppressive confinement get real.

Switching to the perspective of Farah’s watchful mother, Hayet (Ghalia Benali), the film briefly misplaces its confidence — it’s like the cinematography gets the jitters. Still, Bouzid and co-writer Marie-Sophie Chambon invest this side of the intergenerational gap with empathetic energy; the song of innocence becomes one of experience. This debut feature earns its grown-up wisdom without selling out its youthful idealism. Bouzid hears a girl finding her voice, but she knows that the real question is, 'Who’s listening?'"

As I Open My Eyes