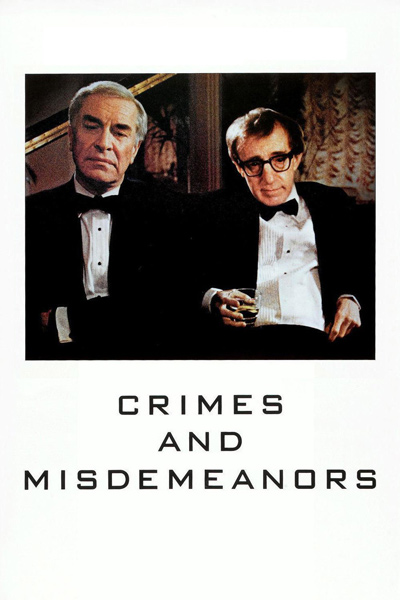 In memory of Martin Landau we screen an archive 35mm print of one of his best performances.

As Hollywood's summer excesses swamp the market with blood, gore and giggleworthy violence, it's more than a bit of a relief to sit down in front of Woody Allen's Crimes and Misdemeanors. It is both a civilised comedy with iron in its soul and a serious examination of our inner fears that also manages to be very funny.

It is, in fact, two films in one, expertly merged and moulded by one of America's few directors still not totally hooked by the box-office game. And for the fans who basically only want him up there on the screen, there is a fat part to be milked.

The first half concerns Martin Landau's distinguished New York eye doctor whose neurotic mistress (Anjelica Huston) threatens to ruin his life by telling his wife (Claire Bloom) about their relationship.

A soon-to-be-blind rabbi (Sam Waterston), to whom he confides his dilemma, suggests he makes a clean breast of it before she does. But his shady brother (Jerry Orbach) sees only one way out. His underworld connections will simply rub the mistress out. If he wants a peaceful life, he'll have to nuke his conscience.

It would seem odds on that such a story, turned this way and that by the fact that the doctor's sister (Joanna Gleason) is married to Allen's documentary film-maker, would somehow fail to gell into a satisfactory whole. But the piece is so well written by Susan Morse, so seamlessly directed by Allen and acted with such aplomb by a distinguished cast you simply don't want it to end.

And it seems that Allen doesn't either since, at 104 minutes, it is one of the longest movies he has made. One of the longest but one of the best, because this shrewd examination of the choices we sometimes have to make in life, and the labels society puts upon them, is so well aware of the fact that comedy is tragedy plus time, and that laughter and tears are soul-mates, not opposites.