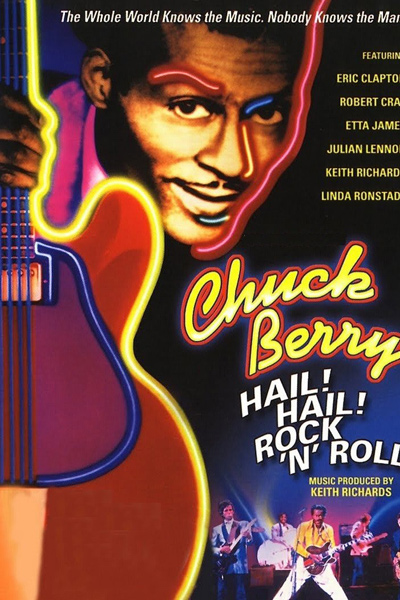 Part documentary, part concert film, 'Chuck Berry Hail! Hail! Rock 'n' Roll' is a detailed, no-holds-barred look at one of the most important and mysterious figures in rock history.

From the numerous testimonies offered by rock luminaries such as Carl Perkins and Bruce Springsteen to the magnificent reclamation of Berry's songs by an all-star band organized by Rolling Stones guitarist Keith Richards, the film shows Berry as he's never been seen before.

Richards took pains to place Berry in the most sympathetic musical light possible, arranging for a reunion filmed at the Cosmopolitan club in East St. Louis with pianist Johnny Johnson's trio, the band Berry played with before striking rock 'n' roll gold.

Much of the film documents Berry's 60th birthday celebration at the Fox theatre in St. Louis, a tremendous concert in which Berry is backed by Richards, Eric Clapton and Robert Cray on guitars, Johnson on piano, Chuck Leavell on organ, Steve Jordan on drums, NRBQ's Joey Spampinato on bass and guest vocal appearances from Etta James, Linda Ronstadt and Julian Lennon.

Director Taylor Hackford tried to expand the film into an intimate portrait of Berry, with footage from Berry Park, the family compound in Wentzville, Missouri, and rare interviews with his wife, parents and close associates.

In the end, 'Chuck Berry Hail! Hail! Rock 'N' Roll' is a fascinating study in American myth-making. What started out as a tribute film to one of rock 'n' roll's founding fathers turned into a profile of a bitter, enigmatic genius intent on revising his own history. Berry's attempts to escape painful truths about his past life serve only to highlight the mysterious events he wants to forget.