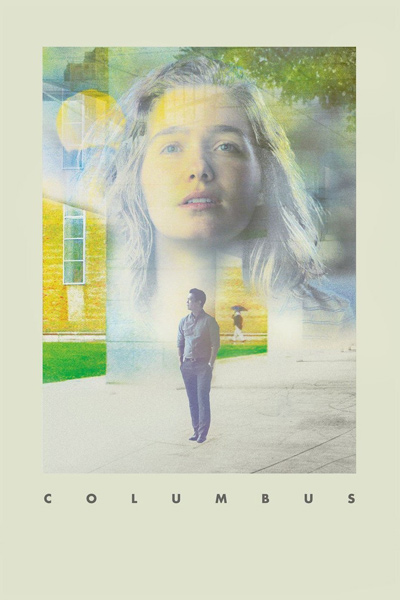 Casey (Haley Lu Richardson) notes early on that one of the many architectural treasures of the titular COLUMBUS features elements that are off-center, but are still in harmonious balance. It is, as with so much else in this emotionally explosive but soft-spoken film, an exquisitely realized metaphor. A tale of seeming opposites with surprising and deeply meaningful tangents, COLUMBUS is a film that considers communication that has little to do with actual spoken words, and characters that need the perspective of an outsider in order to see their own lives more clearly.

Casey, a pleasant young lady not so-recently graduated from high school, is marking time shelving library books and engaging in an anti-flirtation with a smart but awkward older co-worker (Rory Culkin). The close relationship she has with her single mother (Michelle Forbes) stands in sharp contrast to that of Jin (John Cho) and his father. The former has flown in from Seoul to be with the latter after he collapses before giving a talk on architecture at the local college, and finds himself marking time in the city rather than sitting by the bedside of the comatose father he has not spoken to in over a year. The two meet by chance in front of a modernist architectural masterpiece, strike up a conversation after a prickly start, and begin the type of emotionally honest, intellectually intimate relationship that strangers, who know they will never meet again, can sometimes experience. Over the course of several days, they open up about unspoken anguishes, and spur each other to question decisions that they have taken for granted with a series of dialogues about architecture, philosophy, religion, and, indirectly, the meaning of life.

Cho gives a performance that blends abrasiveness and vulnerability. It incorporates an overt chafing against cultural expectations, and the question of whether that chafing is against the desire to fulfill them for a father who has disappointed him. The aggressive pluck of a cigarette from his mouth when otherwise seeming cool and detached is everything, as is the small but telling changes affect as his father’s devoted former protege (Parker Posey) tells him what his father means to her. Richardson, who was all vapid effervescence in THE BRONZE, is here more measured, embracing an offhand maturity whose chafing is less obvious at first, but eventually scratches its way to the surface despite Casey’s instinctive efforts to keep it in check. Together they are quietly riveting. Miscommunications and moments of profound discovery ebb and flow with the suspense of a car chase and the visceral surprise of a thriller. Yet, this is a film where voices are rarely raised; where how something is said is less important than the words themselves, and context is everything; where a seemingly ancillary dialectic on the modern crisis of attention span, or is it a lack of interest in everyday life?, is actually a Greek chorus of commentary on the larger action; where the sound fades during the exposition of why a design resonates, leaving on the expression on Casey’s face, and her body language to explain.

Nothing is left to chance. Writer/director Kogonada frames each scene with a formal composition that is both aesthetically pleasing, yet also emotionally rich, providing contrast to the inner, unacknowledged chaos of the lives he is exploring, and serenity that is healing, never cold, and always rife with creative impulse and intention. COLUMBUS is perfection of form and function.