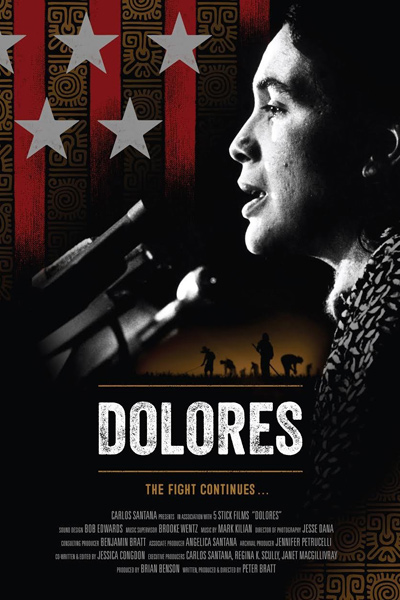 Dolores Huerta co-founded the UFWA along with Chavez, but is rarely given the credit. In Dolores, a U.S. Documentary Competition entry at the Sundance Film Festival, filmmaker Peter Bratt fleshes her out in fullest political and social dimension, but also captures her personal life and driven personality.

A mother of 11 during the course of three marriages, Huerta was a rolling stone even by 1960s and '70s standards. She regularly left her children with relatives or friends to dash off to rally farmworkers to stand up against the oppressive agribusiness industry. It's a comprehensive and earthy depiction of this pioneer Chicano workers' rights leader, a woman whose family extended to migrant strangers but who, essentially, put them before her own children. In this warts-and-all look at the woman, Bratt does not gloss over Huerta's shortcomings but paints clearly her contradictory nature.

Mixing historical footage and interviews with her family and pertinent social activists of “the day,” Bratt distills the complexity of an unstoppable woman and the impact she brought not only to workers' rights but to the expanding role of women at that time. In essence, she never got her due: The face of the movement was always Chavez, not because he was in anyway a publicity hound, but because of the “women should be in the home” values of the time.

Bratt certainly illuminates the uncertainty of her quest: the early dawns of heading out to rally strangers and the turmoil of a life fighting against superior, institutional forces. A spicy mix of talking heads round out the significance of Huerta's contribution: Angela Davis, Chavez and an array of progressive social activists of the time. In addition, dollops of opposition voices are displayed: Bill O'Reilly gives credence to Huerta's lack of credit and historical anonymity when he says, “I've never heard of this woman.”

This documentary gives “this woman” her due.