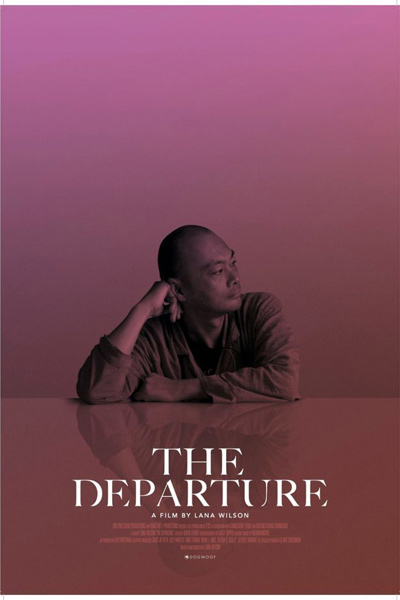 Death hangs over The Departure in grandly cosmic fashion. Lana Wilson’s documentary is a portrait of Ittetsu Nemoto, a Buddhist priest in Japan who’s devoted his life to preparing people for death and trying to talk people out of taking their own lives. The film’s opening sequence captures in detail one of Nemoto’s workshops, in which, among other things, he has his followers write down on small pieces of paper various things they feel they can’t live without, and then proceed, in stages, to crumple most of them up and throw them away. This establishes not only the film’s thoughtful approach to death, but also its calm aesthetic, with its long takes and wide shots inducing a sense of serene reflection wholly appropriate to its eternal subject matter.

Wilson’s film isn’t entirely about death, as it’s more specifically about Nemoto himself, who’s no hardcore ascetic. Though he spends his days with his wife, mother, and son at a temple in the Gifu Prefecture, he goes on some nights, and rather unexpectedly, to nightclubs, dancing and partying in his Zen-priest garb and afterward riding his motorcycle. The more we get to know him, the more we understand that this is his way of letting off steam—especially once he begins to seriously face his own mortality. Later in the film, Nemoto begins to suffer serious health problems as a result of shouldering the weight of all the people who rely on him for emotional support. It turns out that his passion for trying to keep people alive or prepare them for death—a passion that verges on a workaholic obsession—is literally killing him.

Nemoto is essentially forced to practice what he preaches, which is what gives The Departure’s final sequence, in which the subject himself partakes in the same workshop that he led at the beginning of the documentary, its quiet profundity. Wilson may focus on a single figure throughout her film, but through Nemoto she opens up a broader meditation on the ways we all handle the knowledge of inevitably encroaching death.