No Maps on My Taps & About Tap 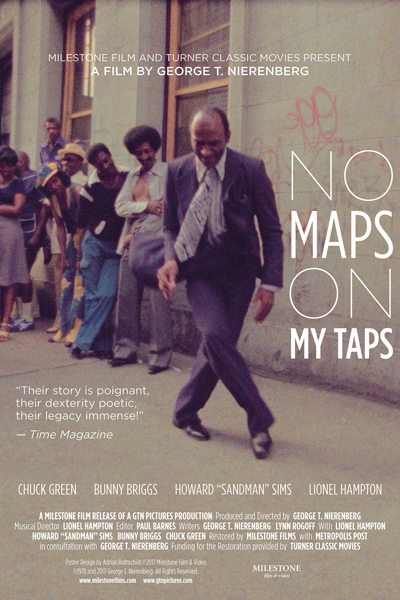 Tonight's presentation starts off with the hour-long crowd-pleasing documentary No Maps on My Taps. It will be followed by About Tap, the half-hour followup documentary made six years later by the same director.

Filmmaker George T. Nierenberg presents a poignant, intimate portrait of three gifted men who represent a bygone era of tap dancing: Chuck Green, Bunny Briggs, and Sandman Sims. They worked in vaudeville and nightclubs but for the most part they acquired their skills on the sidewalks of New York. An older generation of dancers were generous with advice and know-how, and they are also part of this story. No documentary about tap dancing would be complete without footage of Bill “Bojangles” Robinson, but the clip that blows me away features John Bubbles in the 1937 feature Varsity Show. Bubbles was a huge influence on a generation who followed in his (literal) footsteps; he appears in this film in a telephone conversation, as a stroke put an end to his dancing career.

The framework for No Maps on My Taps is a performance at the legendary Small’s Paradise nightclub in Harlem, where the exuberant Lionel Hampton and his band provide backup for a “challenge dance” competition. Green, Briggs and Sims have entirely different approaches to the art of tap dancing, and in candid interviews they tell their stories—the hard-knock experiences that shaped them and came out in their work. They thrive on competition but there is no venom in what they do—just pure, unadulterated joy.

No Maps on My Taps & About Tap