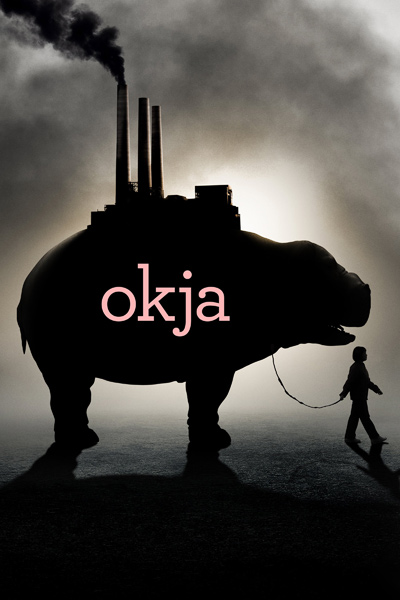 I’m happy to say that one of the summer’s CGI inventions remains astonishing, and lovable, from first to last: the giant pet pig that is the title character of Bong Joon-ho’s Okja.

Midway in size between a hippopotamus and an elephant, with a wide, flat tail, a single udder, and a distinctly humanoid iris around the pupils of her intelligent eyes, Okja is first seen in a pastoral idyll in the mountains of South Korea, living with her 14-year-old best friend Mija (An Seo Hyun). The cinematography is by Darius Khondji, which means the forest is lush green, the streams and waterfalls are crystalline, and the fruits that Okja craves—which she gathers by rolling her bulk downhill into a tree—almost glow with a not-quite-ripe red. Bong and his colleagues have integrated the animation into this setting with a seamlessness to match Okja’s relationship with Mija. The two even nap together, with Mija lying on Okja’s broad back; and when Okja turns over, Mija rolls in unison, leaving the actress miraculously settled on the belly of the CGI pig.

This harmony, of course, is too good to last. We know, because Bong has preceded these leisurely scenes of nature with a prologue set in New York, where a prowling, preening, shouting, arm-waving Tilda Swinton, in full-bonkers exuberance as the CEO of the Mirando Corporation, has strutted through a press conference announcing the birth of miracle pigs that will feed the entire world. Video images flash on all sides, so fast that none of the assembled reporters can wonder what they’re really about. A corporate executive (Giancarlo Esposito) watches from a catwalk, silently mouthing with Swinton the script of her ostensibly candid remarks about these super-pigs—entirely non-GMO!—and the plan to raise the first of them on an ethnically diverse set of traditional family farms around the world.

No wonder the mountains of Korea seem so peaceful after all that. No wonder that Mija is going to be heartbroken—and rebellious—when she realizes that everything she’s been told is a lie. The Mirando Corporation owns her beloved companion Okja and has come to take her back to the United States: first for another publicity stunt presided over by Swinton, and then for the fate of all pigs.