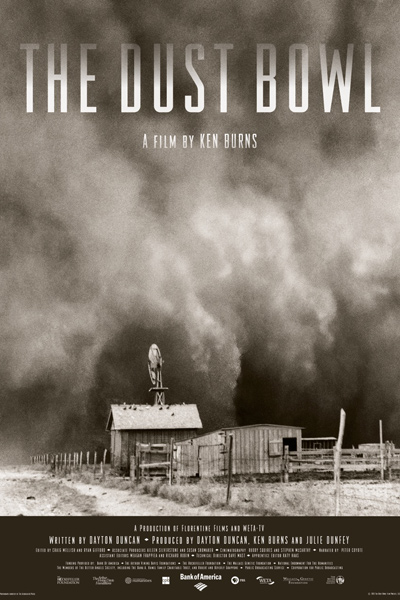 The Dust Bowl chronicles the environmental catastrophe that, throughout the 1930s, destroyed the farmlands of the Great Plains, turned prairies into deserts, and unleashed a pattern of massive, deadly dust storms that for many seemed to herald the end of the world. It was the worst manmade ecological disaster in American history.

Until the arrival of European and American settlers in the late nineteenth century, the southern Plains of the United States were predominantly grasslands, the home and hunting grounds of many Native American tribes and the range of untold millions of bison. It was seldom used for farming. Bitterly cold winters, hot summers, high winds and especially low, unreliable precipitation made it unsuitable for standard agriculture. But at the start of the 1900s, offers of cheap public land attracted farmers to the region, and in World War I, in the midst of a relatively wet period, a lucrative new wheat market opened up. Advances in gasoline-powered farm machinery made production faster and easier than ever. During the 1920s, millions of acres of grasslands across the Plains were converted into wheat fields at an unprecedented rate.

In 1930, with the Great Depression underway, wheat prices collapsed. Rather than follow the government's urging to cut back on production, desperate farmers harvested even more wheat in an effort to make up for their losses. Fields were left exposed and vulnerable to a drought, which hit in 1932.

Once the winds began picking up dust from the open fields, they grew into dust storms of biblical proportions. Each year the storms grew more ferocious and more frequent, sweeping up millions of tons of earth, covering farms and homes across the Plains with sand, and spreading the dust across the country. Children developed often fatal "dust pneumonia," business owners unable to cope with the financial ruin committed suicide, and thousands of desperate Americans were torn from their homes and forced on the road in an exodus unlike anything the United States has ever seen.

Yet THE DUST BOWL is also a story of heroic perseverance against enormous odds: families finding ways to survive and hold on to their land, New Deal programs that kept hungry families afloat, and a partnership between government agencies and farmers to develop new farming and conservation methods.

THE DUST BOWL chronicles this critical moment in American history in all its complexities and profound human drama. It is part oral history, using compelling interviews of 26 survivors of those hard times—what will probably be the last recorded testimony of the generation that lived through the Dust Bowl. Filled with seldom seen movie footage, previously unpublished photographs, the songs of Woody Guthrie, and the observations of two remarkable women who left behind eloquent written accounts, the film is also a historical accounting of what happened and why during the 1930s on the southern Plains.

Sponsored by Department of Cinema Studies & Moving Image Arts, Center of the American West, and Center for Humanities and the Arts