The Man from Hong Kong 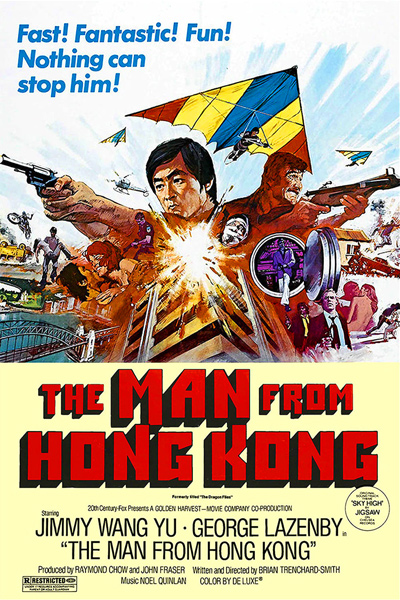 The song jazzing up the opening credits of the director Brian Trenchard-Smith’s highly energetic 1975 action movie The Man from Hong Kong is British pop group Jigsaw’s disco tune Sky High. The chorus crescendos with the words “you’ve blown it all sky high,” which might as well be an anthem for the film-maker’s colourful career – forged in the fire of SFX-laden genre pics of the ’70s and ’80s, including Turkey Shoot, Dead End Drive-In and Stunt Rock.

The Man From Hong Kong’s cracking pace tapers over less than stellar acting, and the film holds up well in the context of a chopsocky fun ride. The stunts are impressive, and the money shot, padded out in glorious slow-mo, depicts Lazenby stumbling around with his back covered in flames while Yu repeatedly punches him.

“I’ve never seen anybody try to run away from his own arm so fast,” quipped the veteran stunt man Grant Page in the 2008 documentary Not Quite Hollywood. The actor burned his arm and according to multiple accounts walked up to the director immediately after and punched him in the kisser.

An expertly staged eight-and-a-half-minute car chase towards the end is a highlight. In this sequence – whipped together with a hell-for-leather roadside energy that predates Mad Max – the movie legitimately achieves greatness. It hardly comes as a surprise that the scene culminates with fire and a big explosion: true to form, Trenchard-Smith blew it all sky high.

The Man from Hong Kong