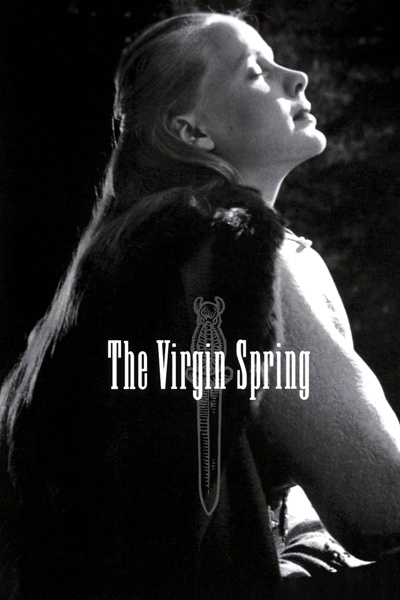 Bergman’s films are characterised by their serious and contemplative tone, measured pace, and formal technique. These characteristics are often used by filmmakers to distance the viewer from the drama on screen and allow them to examine events objectively, but here they serve to render the horrific events in the film even more realistic and shocking. In this case, Bergman’s realistic presentation of events and his portrayal of the family as “ordinary” people, suggests that he wants to pull us into the unfolding drama, not keep us safely away from it.

Images of nature, such as earth, water and fire, recur throughout the film. This may reflect the beauty and purity of the rural environment, but it also suggests that nature can be primal, violent and dangerous. A shock cut to a crow crying out as Karin and Ingeri approach the forest on their journey alerts us, in no uncertain terms, that something terrible awaits the characters if they venture any further, and the frog that Karin hides in Karin’s bread as a spiteful gesture looks like an act of witchcraft. The violent rape and murder of Karin, along with the subsequent brutal retribution that is meted out to her attackers by her father, are staged with virtually no any dialogue. We can only watch as these terrible events are played out before us in near silence and ask, as the father will later do, why God has permitted such a terrible thing to happen to his daughter.

These shocking films, along with The Virgin Spring, find their modern equivalent in Irreversible (Gaspar Noé, 2002), a rape/revenge story played out in reverse (starting at a bleak end and ending at a hopeful beginning) that also hints at other forces predicting the characters’ fates (just as the mother in The Virgin Spring dreams about terrible events, Monica Bellucci’s character in Irreversible has a premonition of her eventual fate). This is not to say that all these films are directly influenced by The Virgin Spring, but Bergman’s film stands almost as an archetypal film version of this “story”, and shows us how so-called ordinary, civilised people can be reduced to carrying out acts of barbarism similar to those of the criminals who committed terrible acts against them. Whereas films like The Last House on the Left and Straw Dogs offer little, if any hope at their conclusion, The Virgin Spring suggests that, even though the family’s pain can never be completely healed, something meaningful can still emerge from such an awful experience, and allow the members of the family to go on with their lives.