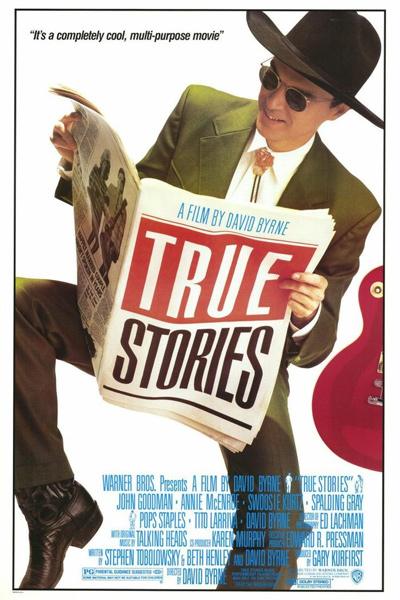 David Byrne is all about cautious optimism these days. Recently, that’s taken the form of an interactive lecture series entitled “Reasons to be Cheerful,” in which Byrne catalogs and champions examples of public policy triumphs large and small from communities around the world. It’s also led to American Utopia, Byrne’s first solo record in 14 years and his artistic reaction to the political and existential fears that radiate daily from the Trump Administration.

[The project] stands as the latest involving one of Byrne’s longest-standing fascinations: how to make America (and the lives of Americans) better.

Perhaps most importantly, True Stories also marks the full emergence of Byrne’s ability to approach frightening existential questions on both a geological and subatomic scale. The film opens with a history lesson, in which Byrne traces the lifespan of the land that is now Texas from the time of the dinosaurs to the decimation of the native Americans to the oil and technology booms of the 20th century. The film’s closing sequence bookends this scene-setting with “City of Dreams”, in which Byrne recaps the same history with an implied caution: We’re only here for the middle of the story. Texas is temporary. Cherish it, before you go the way of the stegosaurus yourself.

These ideas, and the songs they would inspire, helped Byrne transition from the jittery loner of his band’s earliest record into what he is now: an almost-spiritual guide offering solace and navigation through the isolation and despair of life as we live it. No wonder he named the town Virgil.

Of course, like any artistic evolution, this switch in perspective wasn’t without its downsides. It made Byrne’s work more open-handed and accessible, but also less urgent. Its concerns with mitigating interior dread and finding joy in the everyday also operate from a position of relative privilege and, for many facing far more tangible threats to their existence, don’t always feel like a priority.

However. In a political climate where uncertainty is the rule and not the exception, it’s still comforting to know that David Byrne is out there somewhere, riding his bike and dreaming up new ways to help us understand ourselves. Some days, that’s the only reason to be cheerful that we need.