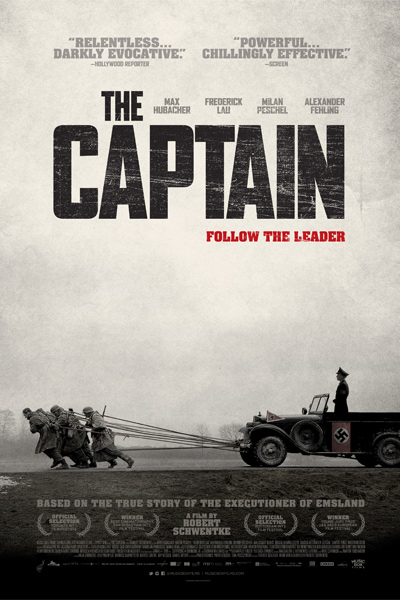 “The Captain” is a strange and somber World War II film, written and directed by Robert Schwentke, best known in the United States for more popular attractions, such as the Jodie Foster film “Flightplan” and two films in the “Divergent” series. For “The Captain,” Schwentke returns to his native Germany and films in black and white, and the result is an art film that could make you think he’s been making them all his life.

It tells the true story of Willi Herold, a private in the German army who was separated from his unit (or he deserted) and was hunted by the Nazi military police. Barely escaping with his life, he happens upon an abandoned car, where inside, of all things, is a German captain’s uniform — fancy hat and everything. He slips into his new captain outfit and immediately gets a spring in his step. He walks, talks and looks like a real-life Nazi butcher, and soon he is acting like one.

The nature of the movie’s premise might lead you to expect that it won’t be surprising once we get the idea that Willi has become a monster, that we won’t need to see the rest. In fact, “The Captain” is full of suspense and interest throughout. For one thing, there’s something in Max Hubacher’s performance as Willi that makes him almost sympathetic. He is very young. He’s a little guy, and at any moment, his ruse may be revealed. He is constantly having to think on his feet, to bluster, to say just enough to intimidate people out of asking to see his marching orders.

Schwentke keeps the focus on Willi’s internal workings. To that end, he doesn’t distract us with graphic violence. This is the story of a mass murderer, but Schwentke finds artful ways to depict the violence without showing it. That’s why, in remembering “The Captain,” you might remember seeing things you saw only in your imagination.